Our last theme park of the trip was Sea World, and we get to go with Granny and Gramps. It was another sunny HOT & STICKY day in Florida. I had only noticed the humidity at the theme parks, but there was a lot of standing around so that might have been why. Right away we see Shamu and take our first picture. On the schedule today is shows and feedings no rides. There were 2 roller coasters and they weren't suitable for Hailey.

I don't think Hailey had any clue about where we were at and what we were doing here, but Shamu came up and snapped a picture. 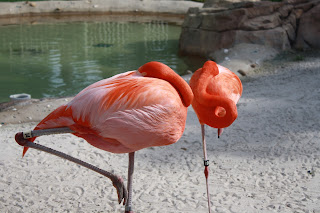 It was pretty early, the flamingos were still sleeping. I love watching how they can balance and sleep all tucked in. I might want to come back as a flamingo at Sea World in my next life...It's pretty neat! 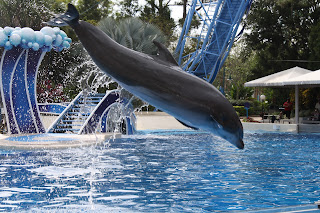 First show we go to see are the dolphins. Such smart animals! 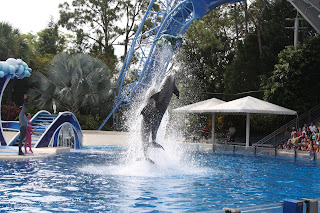 Watching them jump is the best part. 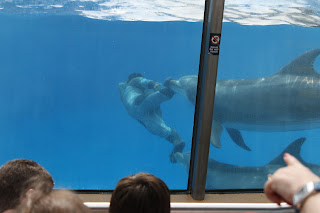 Even though I am a huge chicken, I've always wanted to swim with the dolphins! Maybe one day... 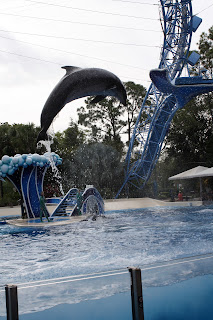 Next show is rescue animals. All the animals in the show were rescued from a near by animal shelter. They had rats, birds, dogs and the funniest thing was a SKUNK! When Hailey saw it I turned to her to tell her what it was and she was plugging her nose! Guess she already knew what it was! 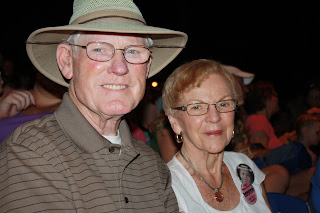 Some of our favorite people!! Gramps and Granny! 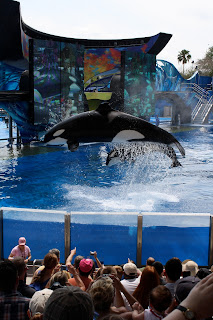 Next up, Shamu. I guess now a days they don't have the animal trainers in the water with the whales anymore. It was a very short show also, but Hailey loves them when they jump out of the water.

Here is a picture of Hailey copying the trainers and doing the jump command. She's too cute! 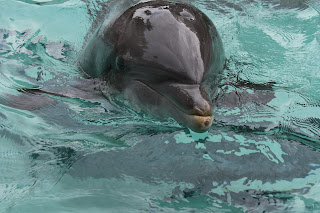 A very special treat for all of us was that Hailey had arrangements to get to feed the dolphins. They give you a plate of little stinky fish and the dolphins come right up to you with their mouths wide open. The dolphins skin feels so slippery. 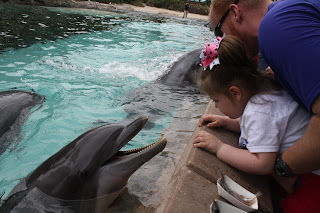 Talk about up close and personal! This was amazing! 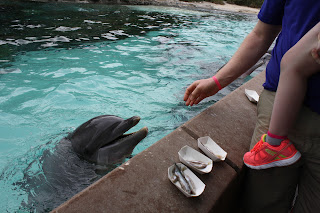 I called them all flipper. 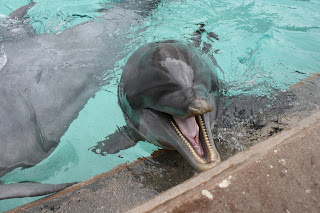 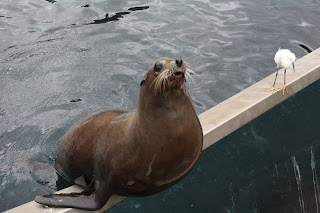 Next up, it's time to feed the Sea Lions! Hailey was NOT a fan of sea lions so we did most of the feedings. Turns out there are these birds that will swoop in on the poor sea lions fish.

We were told that these birds were not "Sea World" birds but they have moved in and adapted to the wonderful laid back life style of free food. 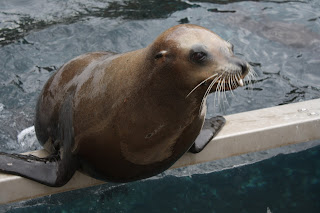 To make sure that the birds didn't end up with the sea lions fish this guy nearly jumped the fence to get close enough to us to grab the food. 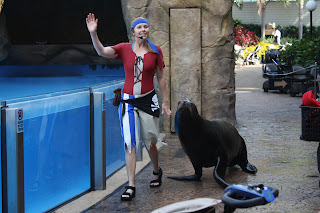 The next show we saw was a Sea Lion Pirate show. I was amazed at how smart all these animals were. I totally under estimate the ability of my dogs. 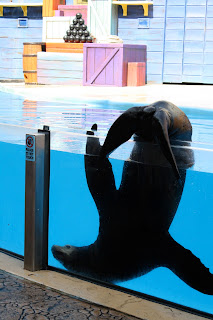 When the Sea Lion did this pose, Hailey thought it was so funny. She clapped and laughed and I don't know what was going through her head. We also fed sharks but it was pretty dark and we didn't get pictures of that. We also saw a CIRQUE show that was pretty cool and the best part was that it was somewhere that we could sit and cool off in the air conditioning. We did everything we wanted to and had a whole 1/2 day left over so we spent it at our favorite place. The Village!

I can't wait to blog about this amazing village! That's coming up next!!