Day 3 we were headed to Epcot Center. I had no idea what Epcot was going to be about but decided to give it a whirl. Today was HOT and STICKY out. We were all sweating, and the heat was making Hailey and I cranky.


I've always wanted to see this giant Geo-sphere. Time for a group picture!

The gist about Epcot is that you can visit all the most popular continents of the world in pretty much a day. That's fine with me. I am NOT a traveler, so this will pretty much be the only way I'd get to go to Germany, China, and France...

We had lunch in China and after lunch we found Mulan. She was SO extra nice to Hailey. Talked about Mushu and thanking us for coming all the way to China to come see her. She had a big hug for Hailey also. So sweet! 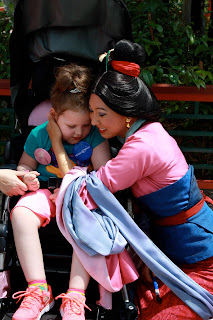 This is one of the building we passed. I don't think there was anything inside of it, but I could be wrong. I pretty much walked passed this to get to some shade. 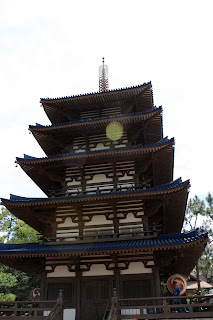 Epcot had a flower festival going on where they took popular scenes from Disney movies and put them in garden form. So creative! 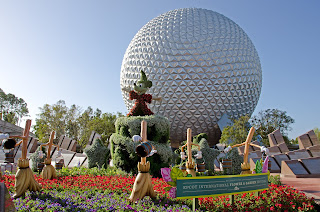 There were also LOTS of animals wandering around. We spotted a Mama duck with her 8 babies. The mama hopped out of the lake and called her babies to follow. 7 ducklings were able to make it out of the lake by themselves, but the "runt" was left behind. I had never seen such a crowd gather to watch and cheer as the little duck struggled to get to his mama and siblings. It took him about 20 minutes, but YES he made it out! 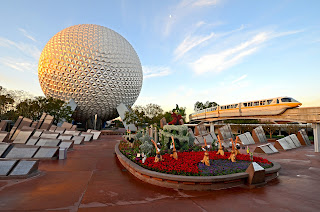 There weren't very many rides there that we were able to get on. Most Hailey couldn't go on so we didn't go on much. There were 2 that I had my mind set on and luckily for us we had our huge family with us so we were able to do those 2. First was Test Track. You "design" your car and when you are all done you go on a test track and it grades you on speed, eco-friendlyness, performance. There is a part where you go 0-60 and bank a turn and they snap a picture. 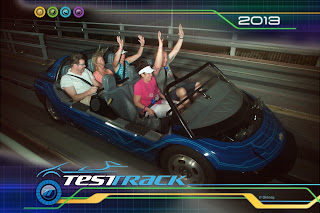 I'm the only one holding on for dear life...

There was also one more ride I heard that I HAD to ride at Epcot. It was called Mission to Mars. You get two choices of ride. A mild ride to Mars or an Extreme ride where you have tons of warnings you have to listen to before you finally decided if you really will take your chances. They give you 6 chances to back out. After the 4th time they freaked me out, I switched lanes to go from extreme to mild, but my family peer pressured me to go back to the extreme side. I asked the ride attendant if this extreme they keep mentioning is really extreme or are they trying to scare me? All the warnings were scary, but there were little 8 year olds ready to go on it. Here is the description of Wikipedia:

Mission: Space is meant to simulate astronaut training for the first manned mission to Mars aboard the fictional X-2 Deep Space Shuttle in 2036, right after the seventy-fifth anniversary of Yuri Gagarin becoming the first human to enter space. (The year 2036 can be deduced from plaques in the attraction's queue celebrating 75 years of human spaceflight, including two faux milestones in the future.) Riders are "trainees" at the fictional International Space Training Center (ISTC), where they are arranged into crews of four before watching an introductory video featuring actor Gary Sinise, who starred in the space drama, Apollo 13 and Mission to Mars.
Before boarding the simulators, each rider is assigned an on-board role (navigator, pilot, commander or engineer) and given two tasks to perform during the mission (pressing a specific button when told). For example, one of the commander's buttons initiates the rocket's first-stage separation, and the other activates manual flight control. The spacecraft's on-board self-automated pilot will perform each task if the rider does not respond to his or her prompt from Mission Control or if there is no one to perform the task. Also featured are various labeled buttons and switches which the rider may play with but do nothing; they are only there to add to the realism aspect of the ride.
The mission includes liftoff from the ISTC, a slingshot around the moon for a gravity-assisted boost, a brief period of simulated hypersleep (to pass the lengthy time required to reach Mars) and a descent for landing on the Martian surface. As a training exercise, the mission contains several unexpected situations that add to the drama.
The attraction is a multiple-arm centrifuge that achieves the illusion of acceleration by spinning and tilting sealed capsules during the four-minute "mission." Fans blow air gently at riders to help avoid motion sickness, and a magnified display in front of each rider simulates a window to space with high-resolution computer-generated imagery. Mission: Space comprises four separate centrifuges, each with 10 capsules holding four riders.
The attraction exposes riders to forces up to 2.5G, more than twice the force of gravity at the Earth's surface (effectively multiplying a rider's weight by 2.5). A few months after the ride's opening, motion sickness bags were added within easy reach of riders.

So after hearing all the warning, and asking if I'd be okay I bit the bullet and went for it. Josh and his brother in one capsule, me, my sister in law and mother in law in another. The first thing I see inside is barf bags and I grab one. This ride simulates launching into space and the feeling I had would be what I would have imaged it would feel like. You feel your face pull back and I gritted my teeth and held on. They keep warning you, KEEP YOUR EYES OPEN so that you don't get disoriented. Not something I wanted to do so I kept them open. The g's you feel as you sling shot around the moon was nothing nice either. It was extreme. One of my favorite warnings was:
There are also signs which instruct the rider to keep their head flat against the headrest, stating that if one ignores this, the centrifugal motion acting on one's head can cause undesirable effects such as dizziness and/or headaches, or possibly even more serious effects.
That sounded horrible. Why even create a ride like this? Then I discover that 2 people have died on that ride. A 4 year old and a 49 year old. I'd skip this ride if I were to give anyone a review of it. It wasn't that wonderful that I would risk all the warnings again. I was so nauseous after that ride. BLAH!
So Epcot was done early but that was fine because Josh's brother, his wife, then Josh's parents were going to be heading to the airport. We still have 2 more parks to visit and granny and gramps will be staying to go to Sea World with us. Josh, Hailey, and I will be heading to Universal Studios and Islands of Adventure the next day.
Thanks for reading...to be continued!