Ain't no party like a Make a Wish Party!!

Being that this year was our first year being a Wish Family this was the first year we were invited to their holiday party which was called "Santa's Open House." They turned the Renaissance Hotel into a Wonderful Winter Wonderland! Hailey was first adorned with a candy garland necklace filled with chocolates and sweets!


At the door we ran into our Wish Granter!! The last time she saw Hailey was right after we got back from our trip and to see Hailey upright and walking brought such a smile to her face. She was amazed! We all have been!

As soon as you walked in Hailey knew what she wanted to do first, Face Painting!! She picked a pink flower.

The perimeter had games and gifts for all the children. Hailey loved ring toss! The volunteers would clap and whoop so loud even if the ring didn't make it.

There was another ring toss and Hailey knew exactly what to do. It was a reindeer round up!

There was also a Therapy dog! Our favorite animals are the therapy kind! This is Dog Barker and he works with Make a Wish! Such a good pup.

There was a table that was piled high with Magic Kits donated by Criss Angel! Hailey was seriously so happy to get this! 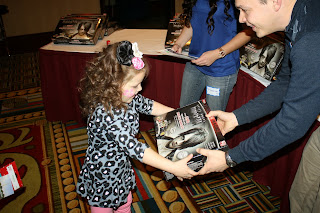 She had such a big smile on her face. All the fun and gifts were more then we were expecting!

There was even a special visit from Santa all the way from the North pole! I think Hailey is starting to warm up to this guy. Every time she sees him he has something for her. This guys is pretty neat!

Hailey made a gingerbread house ornament. She was very proud of it!

Then the BEST part of the night was we got to see Hailey's very best friend!! Oh happy day!!

The girls went over to the balloon station where Balloons with a Twist made these awesome balloon sculptures! We got a Snow White and Merida balloon dolls! That is some talent!! They also double as HATS!!

After dinner it was time to DANCE!! They had a DJ and the kids were out there letting lose and having SO much fun!

We then went up to our friend Criss Angel and had to pose for a picture. We thanked Criss for doing the PSA with Hailey and donating all the magic kits and following us on Twitter!!

Hailey had to take her BFF to go and see Santa and let her know that if you take a picture he'll give you a PRESENT! LOL! Hailey and her hand holding. She doesn't let go!

Time to open the gifts from Santa! 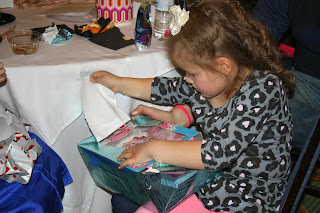 BARBIES!! Thank you to everyone who donated toys to the Make a Wish toy drive!

Hailey had a special gift for Amanda. Hailey picked out these BFF ornaments at Justice and knew she wanted to give it to Amanda. Every year we have a tree we will put this ornament up and think of Amanda and the great friendship we have made!

Hailey and Amanda asked Criss to take a picture in the Winter Photo Booth and he was happy to do so. He even signed each one for the girls. 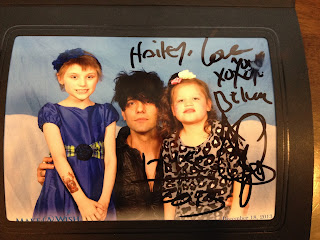 It's hard to think that with all we have going on in our lives with terminal illness, medications, doctors appointments, therapy, diapers, insurance and everything else that comes with this territory, that we as parents can say that today was a WONDERFUL day. Seeing Hailey smiling the whole time she was at this party and knowing she didn't feel different and that people were happy to see her and have her there is heartwarming. I think one of the greatest things I heard was from the Make a Wish photographer that said to Hailey, "I remember you!" I love that Hailey makes that kind of an impact on people that he would remember her. I want people to know Hailey and have her in their hearts and remember her. Always. I can't say enough about how important it is for parents to have organizations like Make a Wish available to their kids. They are amazing and I can't ever thank them enough for what they do for Hailey. We feel the love!
at 10:54 AM No comments:

This year has been very special to us as it was the year Hailey was granted her Make A Wish. Macy's department store is currently running their #Believe Campaign. If you write a letter to Santa and drop it off in a special mailbox, Macy's will donate $1 to the Make a Wish Foundation. They hope to raise $1,000,000.00 yes, one million dollars! The Make a Wish foundation has a very special place in our hearts.
We wanted to take Hailey down to Macy's to write her letter to Santa and have it deposited in the #Believe mail box. 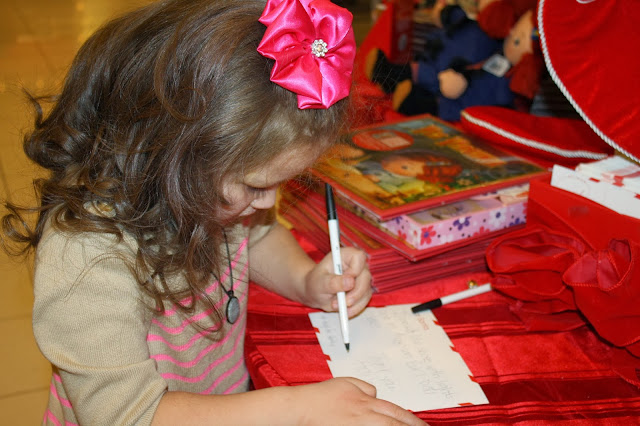 Hailey needed some help writing her letter so we did the hand over hand technique as she told me what she wanted to write. 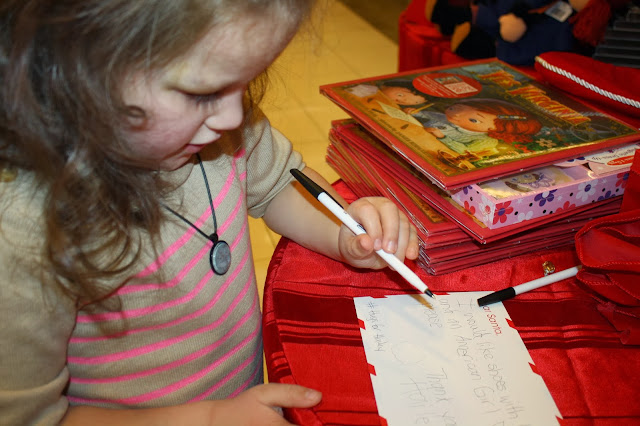 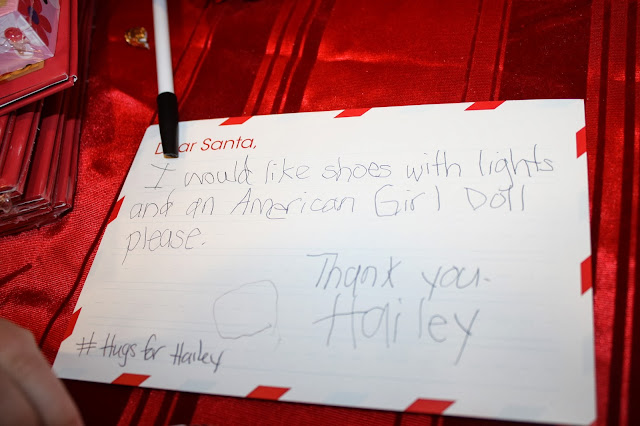 After Hailey wrote her letter she sealed it with a kiss! 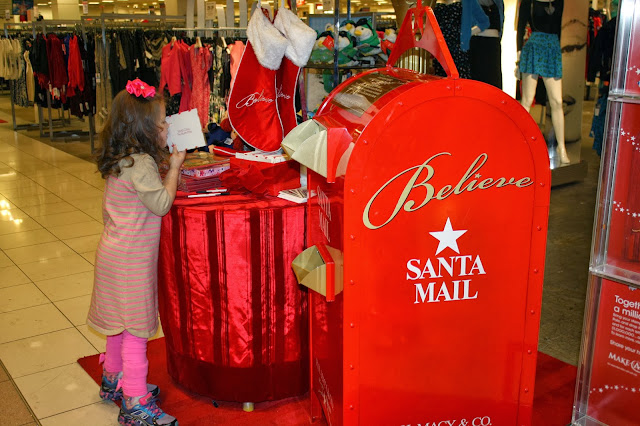 In the mailbox it goes and it'll be off to the North Pole!

Please consider having you or your child write their letter for Santa and dropping it off at your local Macy's. Help the Make A Wish foundation reach their goal of 1 Million Dollars. I have MANY posts on Hailey and Make A Wish. You can search our blog and read everything I've written. Such an easy way to help an AMAZING organization.
We also still have PLENTY of spots open on our Hugs for Hailey Team for the Run for a Wish event happening in February. You can sign up HERE or just donate and help us reach our $1,000 goal. To join our team it's best to use a desktop computer when signing up.
There is also time left to donate a new toy at a local Bank of America's here in Southern Nevada. Have you all seen Hailey's PSA with Criss Angel?