After waking up at 8:am in Florida and really feeling the time difference I got ready while Josh and Hailey were still sleeping. I had orientation at 9:30 am and I would be getting our park tickets and learning of what the ins and outs of the village were. I will be writing a WHOLE post on just the village in a day or two, so more on that later.
I had planned on doing Disney's Animal Kingdom first and the weather that day was GREAT! It was sticky humid, but since there's no getting around that, I tried to ignore it. The whole family met up and we were ready to go! First stop at the Animal Kingdom - Africa for a Safari!

We had one happy girl! 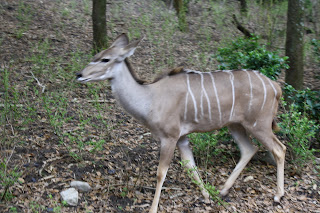 Now this safari feels like what I would imagine a REAL safari felt like. The animals are up close and personal. They just cross the road when the want to, and even stop to look at you. 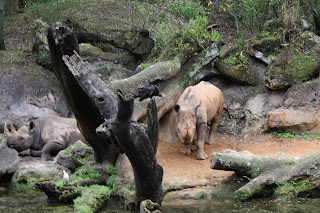 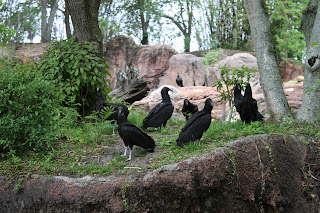 Don't get mad at me, but I am not remembering every single kind of animal we saw...! I don't know what kind of birds these are. 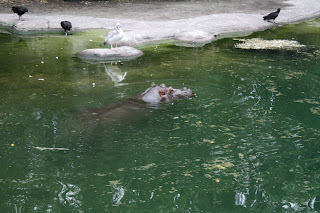 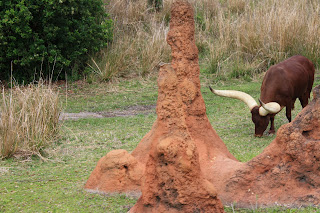 I would suppose that I should have taken a better picture of that bull like creature on the right, but what caught me off guard was that little mountain in front. That is a Termite Hill! The termites created that from scratch. Reminds me of making a mountain out of a mole hill. Knowing how many thousands of termites where hankered down in there made me itch. 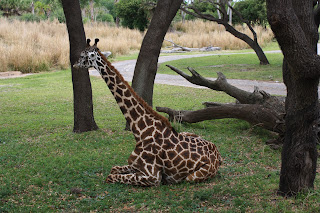 Look how close we were to this Giraffe! I think we learned that it takes a Giraffe 30 seconds to sit down but only 5 seconds to get up. So pretty! 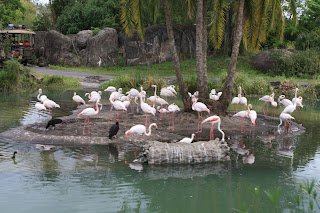 Flamingos. As Hailey would yell, "PINK!!" 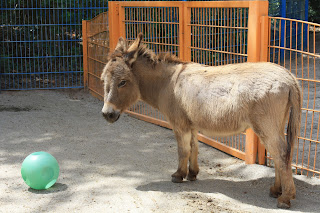 There was also a petting area where they had donkey's, pigs, and Goats and we decided to check that out. Hailey was not a fan of petting any of these creatures. There aren't very many rides per say at Animal Kingdom, it's mostly a sight seeing place and it's not very big. We did stop in on a couple shows. One was the Lion King show where the music, floats, and costumes were just like the broadway musical ones! Another show we saw was Finding Nemo the Musical. Hailey LOVED that one, especially the bubbles that constantly fell from the ceiling making it feel as if you were underwater with Nemo. I had a hard time picturing how this show would be since there are NO songs in the movie!

Since there wasn't really much to do we decided to start getting autographs from out favorite characters. This is NOW Hailey's favorite part. Just 2 months ago she was screaming her head off at Disneyland when we saw a character!  We had an escort that took us from character to character with no wait in line! Animal Kingdom was great about that. First up: 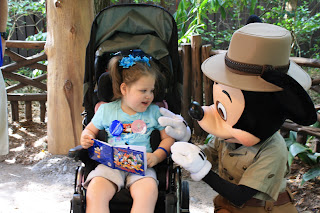 Mickey Mouse! Each character took special time to get down to Hailey's level and make her feel special! <3 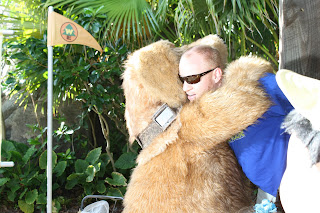 Doug felt as if Josh could use a hug and a lick! LOL!!

Since Hailey's Granny and Gramps were NOT interested on going on a high speed roller coaster they offered to watch Hailey while the rest of us did. Have you ever heard of the ride:
Expedition EVEREST.? <--- Youtube Video. Well I had heard that I HAD to ride it and it was fun and not scary, and that was from little kids so I didn't think it could be THAT scary. Those kids were LIARS! I've never been on such a crazy coaster! I don't know if you want me to go into detail of this ride but here is a description I took from Wiki (skip if you have plans on wanting to ride this)

The train departs the station to the right and climbs a small lift leading to a short drop, then circles around to the 112-foot (34 m) lift hill, carrying the riders into the 200-foot-high (61 m) mountain. On the way up it passes through a ransacked temple with murals of the yeti, warning the riders that the mountain is his territory. At top of the mountain the train curves around the main peak and goes through a cave. When it emerges, it draws to a halt in front of track that has been torn apart, presumably by the yeti. During this brief stop, one can hear the hissing of the brakes as a switch behind the train is thrown. The train then rolls backwards along a new route that spirals down through the mountain, coming to a halt in a large cave, where riders see the yeti's shadow on the wall as he tears up more track. As the shadow moves away, the train rolls forward out of the mountain and down the main 80-foot (24 m) drop. It enters a 360° helix and speeds back up through another cave in the mountain, where the roars of the yeti are heard once more. The train exits from the rear of the mountain and enters a large helix before being lifted back into the mountain a final time. The train drops through a cave, where a large yeti is reaching down toward it. On reaching the bottom of this drop, riders return to the unloading dock and depart into a gift shop. One ride takes about 2 minutes and 50 seconds.
Wikipedia also lets you know that only 1 person has died on the ride since it's been open. Sounds fun right?
Being a guest of GKTW we got all our ride photos for free and I'm very confused as to why this photo isn't as bad as my Splash Mountain photo that I am really debating on posting! 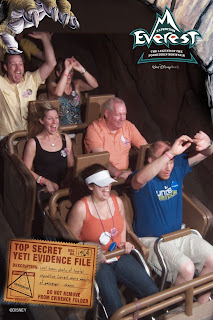 So that's how we ended our day since the park closed at 6pm! Which was fine cause I could not walk a straight line after that ride. I was SO motion sick. We all decided to head back to the village and get some dinner and plan our day out for tomorrow. We will be going to the Magic Kingdom and Hailey will be transformed into a princess for a meet and greet!