Part 2 of Hailey's Make a Wish Trip - Hailey, your ride is here!

Hailey is not a morning person. In order to be at the airport in time our ride would be at our house at 8:30 am. When I woke up and started to get ready I looked out the window and it was so gloomy. It was raining! We had to fly in the rain...ugh! Hailey woke up a little snotty and that didn't sit well with me. We all got dressed had our luggage by the door and ready to go and then our ride arrived! 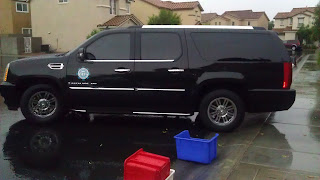 Don't mind the recycling bins tossed about. Republic Services doesn't feel the need to put the bins back on your curb. They like to toss them back at your house when they come by. I don't know if we pay extra for this service or not...

We were all decked out in our Make a Wish shirts and the airport is only 20 minutes away. The ride there was a little slippery and we slid to a few of the stop lights. Hailey got car sick and ended up vomiting ALL OVER herself. Once we got to the airport we had to find a family bathroom and get cleaned up. I was hoping this wasn't a sign of things to come.

When we got to the airport the manager for Southwest airlines was waiting for us. He had our bags checked and taken care of and we were off to the TSA and security for our pat down. Every one was so nice to us. Asked us where we were going and told us to say hi to Mickey for them. Everything was going absolutely great. Thanks Jim for the royal treatment for our princess!

Jim made sure that the airline knew we had to place Hailey's CARES system and it kind of surprised me that no one has ever seen one before. I wanted to ask if I installed it right but my guess was as good as theirs...LOL! So we are off and on our way to Florida. 4 1/2 hours on a plane. One reason I don't travel is that I don't like being cooped up in a small place for too long.

I had all kinds of things lined up in case Hailey got restless. We had her iPad with games and movies ready to go when needed. Hailey loves stickers so I bought a book of 5,200 stickers. I brought paper and markers and if all else failed...Really big lollipops. Ones she could make a mess with but not gag herself with. 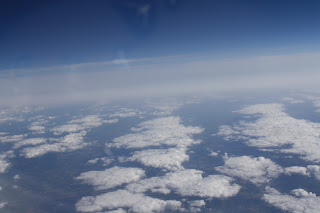 We looked out the window a lot but it wasn't like I could tell where we were. I knew if I wore a watch I'd be checking it every few minutes so instead I kept asking Josh. He discovered that SWA had something online for free that tells you where you are on a map. That was helpful.

We enjoyed drinks and snacks and conversation. Our flight attendant was extra awesome! When we had landed we were last off since we had to wait for them to bring up Hailey's wheelchair. She had announced to the plane before the doors opened that Hailey was in Orlando on her Make a Wish and to make sure they say hi when they passed us and SO many people did. They said, "bye Hailey" "Have fun Hailey" and that's when I started with the tears. I think people that were on that flight will remember the time there was a little girl on her make a wish on the plane with them.

When everyone was off and Josh got the wheelchair the pilot asked if Hailey wanted to come up and say hi. Once Hailey saw all those buttons up there and all the lights she was a little overwhelmed and didn't want to go. It was extra nice they invited her though!

Once we got to the front gates that's where our greeter was. Our greeter was Jo and she has a HUGE heart! She volunteers at the GKTW village and she really loves doing it and you can tell how much it means to her to get to volunteer. We got to LOVE Jo. We saw her a lot at the village so she will appear in future posts again.

We got our bags and Josh's parents were at the baggage claim. They would be experiencing this trip with us along with Josh's Grandparents and brother and his wife. There would be 9 of us! Since they didn't all get in until later we were going to head over to the village and check in. There was a lot to go over and orientation was tomorrow. There I would get our tickets to the parks and our week long vacation would begin.

I loved how when we arrived the front desk staffed said, "Welcome Home!" I couldn't wait to get everything started. Our villa was SO NICE! It had a full kitchen, living room, washer and dryer AND Detergent, 2 bedrooms, 2 bathrooms and Hailey's bathroom had a roll in shower and also a jetted tub! Tonight we are going to put everything away and in the morning before orientation I'm going to go for a walk and take a breath for the first time in almost 2 years.
at 10:34 AM