We were scheduled to go back to Utah in early November to Hailey get Botox injections in her calves. With the spasms Hailey always has her legs stick straight. Here is a picture of her feet while she is in bed with her "therapy dog" Daisy. 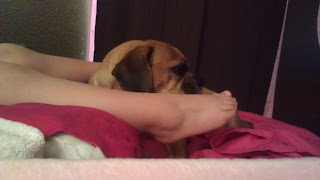 After the botox injections she will have to wear Plastic Boots called AFO's or Ankle-Foot-Othosis. They will stretch her to a 90 degree angle. We had to go to a prosthetic clinic to have Hailey fitted before we got to Utah.

Hailey was fitted by first takings molds of her feet which wasn't fun, then we had to go back to pick them up before we left to Utah. When the tech placed her feet in the splints Hailey was NOT a happy camper. Having her AFO's on are incredibly painful. It's similar to have super tight muscles and having some stretch and stretch them and not stop no matter how much you plead. :-( 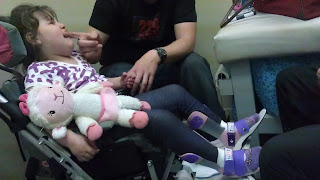 We comfort Hailey with things she can chew on. She only wanted to chew on Josh at this point. Notice how she is holding his finger as she is biting down. What a good dad. It's not like she doesn't bite incredibly hard either. It HURTS!! We did get to the point where we were teasing her about biting daddy and she shot a smile here and there thinking it was pretty funny. 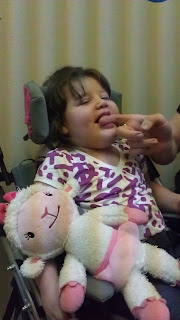 Of course lambie was there. We can't go to an appointment without our trusty sidekick! 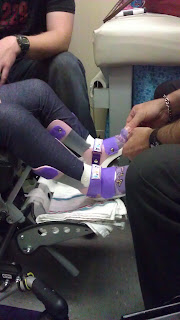 So we got our AFO's and headed to Utah. Another long drive, another hotel room to sleep in, another night away from home. We have our appointment and Hailey gets her injections. She screams and cries. The doctor asks how we think she is depression wise. Um? I guess I never thought of it. She asked if Hailey got upset when she is around kids that are running around, if she gets upset that we can't understand her or what she's asking for since she doesn't speak anymore. She gets upset but I can always calm her down, but I guess depression is something to be expected. I just thought I would need medication before she does. She's such a trooper. To be put in this horrible situation and to still be able to smile. I can't imagine many if any people in her situation could do that. I don't think I could. 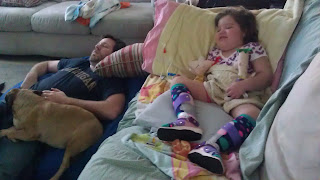 We discovered that we needed to invest in knee high socks! She wears them under her AFO's. She is better at wearing them, but I don't know when I will be able to get her to wear them 24/7. She wears them to school, but if she thinks about them being on her feet she cries and cries. I know they hurt, but I know they help. I just can't explain that to her. I don't want her to think I am just being mean. Then I think that there are kids that sick or not have parents that are "being mean" to them.

So we wear them as much as we can but she's not at the point where she is wearing them to sleep at night. We hardly get any sleep as it is I don't know when I want to try having her sleep all night with them...