Our Story Continues...IVIG for the second time

Our main consern with the IVIG treatment is that we had assumed it didn't work last time. We gave her 5 doses over 5 days and we took her home and she still wasn't able to bare weight on her legs. They told us that this time they will essentually combine the 5 doses into 2 doses and see how that goes. Then the bad news...The neurologist wants to do another head, neck, and spine MRI. MRI #5& #6 the first of her head which will be about an hour and then the spine the day after which is about 1 1/2 hours. UGH! I hate that these MRI's take so long and I hate that they have to put her under to do them. I know is HAS to be done, but it doesn't make it any easier.

That night they administer the first "doses" of IVIG. Again with the pretreatment, first tylenol, then solumedrol, then the benydril. The benydril helps Hailey to fall asleep and sleep through the treatment. Josh stays until about 1 am and then heads home to take care of the pups we have at home, take a shower, and try to get some sleep until he's back the next morning. After the treatment is done, I change  Hailey's diaper and she goes right back to sleep and I try to fall asleep myself. When you are going through something like this with your child, sleep is not easy to come by. When I do fall asleep I am awoken by a helicopter. Yes we have a semi-private room right next to the Heli-pad. It's must have been a rough night in Vegas because that thing was coming and going every 1/2 hour.

By morning time Hailey woke up when the Dr.'s came in to check up on her. Told us that the MRI will be later this morning and the neurologist will see us this evening. We should also have a few test results from the lumbar puncture.

When it's time for Hailey to go for the MRI we all walk with her while they wheel her bed through the corridors and I can't help but wonder why other kids are here. I compare the hospital to a prison. Not that I'd ever been to prison, just from what you "know" from tv and movies. You don't know what each person is "in for" and you don't/can't ask. The meals are edible but don't taste appetizing at all. The place smells, the tv selection is very limited and if you don't get a great nights sleep. Before the MRI starts I cradle Hailey in my arms until they are ready for her. She falls asleep and that should make it easier on us to hand her over. They ask me to put her on the table and before I do Hailey wakes up. They say they can give her the propofol while I am holding her and then I can put her down. I thought this kid was heavy before, as soon as that propofol went in she went utterly and completly limp. Like a wet noodle. I had to lean back so her head wouldn't roll off my shoulder. I put her on the table and I see the MRI machine. The sound that comes out of one of those is so incrediable loud and scary I don't see how they could do an MRI on a little kid without them being sedated.

Another long hour goes by and Hailey is done. We all go back to her room and they have us try and get her to wake up all the way. Hailey is not a happy camper. She is very restless and angry and wants to be held then wants to be put down and just can't get comfortable. She's allowed to eat as soon as she can wake up and I tell her we can go to the playroom before it closes and that makes her happy. After nearly 2 hours she's awake and eating and almost ready to go to the play room. When we put her shoes on she doesn't seem to have gotten worse, like we had been expecting. Remember when we got there she was walking on her own, but very unsteady. Today was the same. As long as we held her hand she was walking on her own. She was in a good mood now. She was ready to go play. 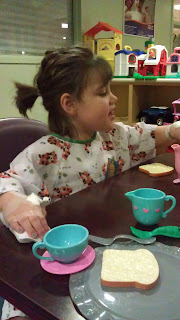 Josh's mom and Hailey playing in the Kitchen in the playroom. Anything having to do with playing kitchen, or tea party, or restaurant is right up Hailey's ally. 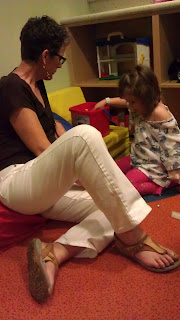 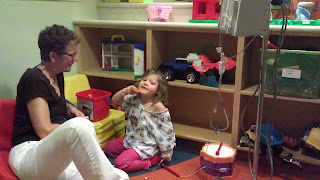 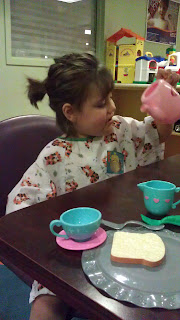 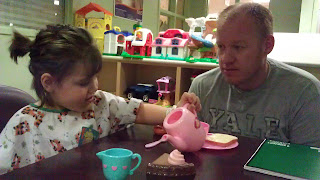 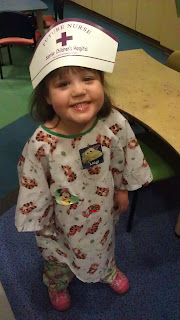 After this first dose of "concentrated" IVIG we are all shocked that she's coming around again. She is even standing on her own. She loves the playroom. We stay for as long as we can and then go back to our room for dinner and a movie.

The neurologist comes in and tells us the results from today's MRI. It's pretty much the same as it's always been. It showed diffused white matter. (That's a bad thing) He still wants to do the 2nd MRI tomorrow and as soon as we think he is leaving another Dr. comes in. He said that he has some results from the lumbar puncture. The only results he had was that her Thyroid numbers are not normal. The neurologist suggests that we talk to an endocrinologist. I have never even heard of one before, but I will add her to our ever growing list of doctors.

The next day Hailey has another MRI and this time on her spine which takes FOREVER! Nearly 2 hours! It was torture to wait. I just paced the hall. Once that was over it was off to recovery and then back to our room. Hailey was really out of it. There was no playroom that night. The results of that MRI was clear and the Neurologist suggested putting Hailey back on steroids, but he has a different plan this time. (I will explain that later) At this point I am kind of upset that he keeps doing this. On steroids she is good, off steroids we are in the hospital. Yet he insists she can't be on steroids forever. We decided at this point that I want to look for another neurologist and another pediatrician while I am at it. I also want to take Hailey somewhere else because I am not happy with the guessing game they are playing at these hospitals with Hailey. I ask one of the doctors where he suggested I go. I was told UCLA is huge and he thinks that would be a good place to go. I also ask about a new peds doctor and I get a name and number.

We aren't in the hospital that long this time. I think we were there a total of 4 days and by the time we were discharged Hailey was walking out on her own. I am thinking in my head, "the IVIG worked this time!"This was the first time I was taking Hailey home after an episode that she isn't starting from square one. I was so relieved thinking that we finally may have figured out that if we keep this kid on steroids and monthly IVIG treatments she'll be good to go...(if only that were the case.)

I make an appointment with the new Pediatrician. When she sees us for the first time and asks me Hailey's history I kind of, in a nice way, asks how much time she has because it's a long story and I know she has other patients. She told me to take as much time I as need. She was beyond interested in Hailey's story and helping me get whatever help I needed. I told her I wanted to go to UCLA and she told me she will get us there, and that she did.