I guess I ran out of space for tabs up at the top so I think I will post on the main blog, but leave links in the tabs so I can keep everything in order. P.s Sorry for the grammatical errors and mis-spellings.

Where did I leave off?

Two weeks after Hailey finishes the steroid wean she was on since August something goes wrong...It's Halloween day. Hailey was having trouble blinking her eye, that's what I noticed first. Not both just one on her left side. Then I go to tickle her and when she laughs only HALF of her face works. Right away I think, Is she having a stroke? Did she already have a stroke? What the heck is happening now? This is FREAKING me out! 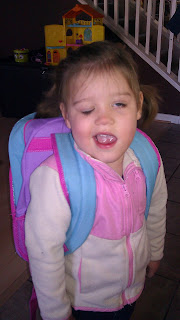 Right away I called her neurologist and tell him what is going on and how this is URGENT!! I get told: "I think I know what it is, you don't need to bring her in, but, if it gets worse call me back. Um...WHAT? I tell Josh and he said go with what the Dr. says. She how she's doing after tonight and if I want to take her in we will go tomorrow. So like I said it's Halloween night. and I have been telling her we are going trick or treating for days. We debate and then decide we could go to a few houses then see how she feels and go from there. Whatever is going on doesn't seem to be bothering her. I ask if it hurts and she says no. So we go trick or treating. 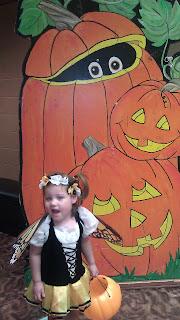 The next day it's the same no worse, but I don't like it and we take her into the neurologist anyway. He tells us it's what he had thought it was and it's called Bell's Paulsy. It's isn't something that was related to "ADEM" and it should go away in about 6-12 weeks. She ended up having a little residual effects from it but it did clear it's self up. I was curious to how she got it. I remember brushing her teeth and seeing a little white dot on her tongue. I thought it was a swollen taste bud but it was some kind of canker sore...

So now she's off steroids, It's November 2nd and it's her first day of school. She is super excited. I take her and show her who the teacher is and they tell me to just leave her and pick her up in 2 1/2 hours. I had no idea what to do with myself at home...I go to pick her up and she does NOT want to go home. I tell her that she gets to come back tomorrow, but she wants to stay. She LOVES school!

The rest of November goes by without a hitch and we have an MRI scheduled for December 16th. They told me I had to make an appointment with the neurologist for the results. When I call to do that they schedule me for February 2nd. Well...that's kinda a long ways away and I questioned that. The lady said that if there was something urgent they would call to reschedule. With every thing we have been through, the uncertainty if this whole ordeal is behind us,  and the mountain of bills that have started to pile up we decide that this will be the first time we won't make to Josh's hometown for Christmas. Josh wasn't too happy about not seeing his family, but we had to do what we thought was best. We had our own family Christmas at home. Most my family lives by us so it's not like we were totally alone. It was just different.

The day of her MRI I was a wreak again. They would have to sedate her, but she should only be out for about 45 minutes. Then we were going to take her home and have a pajama movie day in bed. So The MRI goes fine, they don't tell us anything. We go home, relax, watch Phineus and Ferb on loop. She seems as you would expect. Cranky, groggy, hungry. So now we just have to have Christmas, celebrate the new year, hope this is all behind us and go to our appointment on February 2nd for the MRI results.

We don't make it that far though...