We decided that the PERFECT Christmas gift for our little Disney enthusiast was a trip to her favorite magical place...Disneyland!! I'm not gonna lie, I really wanted to visit Disneyland at Christmas too, I've never been during that holiday! So we made plans and headed on down. To tell Hailey what her Christmas gift was, I made her a special present that she was able to open right before we left: 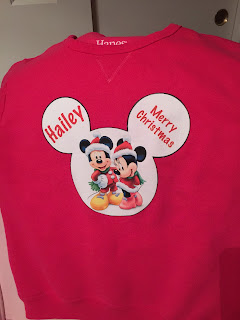 We ended up having to leave our house so late in the day that we ended up arriving when it was already dark, but still wanting to head over to the park. Hailey said that she wanted to go on Heimlich's Chew-Chew-Train first so that's where we headed. No one was in line for the 20 second ride so we walked right on! Dad had to sit by himself, but Hailey assured him that next time he could sit by her and I'd sit by myself.


We simply can't go to California Adventure and NOT say hello to our favorite Queen and Princess at the Character Close up! No matter how many times we see Anna and Elsa, Hailey still gets star struck!


A special surprise was taking Hailey to see Santa Clause. Santa at Disneyland knows EVERYTHING. He knows your name, where you are from and even that you wrote him to tell him that you wanted Shopkins...Season 4 by the way! I love this photo of Hailey and Santa! The next morning was pretty exciting! First we headed on over to Disneyland and while walking to It's a Small World, we found Alice and the Mad Hatter! We've never seen the both of them together so we just had to stop for a photo and autograph!

We were so lucky to have met up with some of our good friends and leukodystrophy family during our trip. Katelynn's Butterfly Kisses Family showed up to spend a few hours with us that we filled with as many rides as we could. I love being able to meet up with anyone from Hunter's Hope. Love this family, and how I wish we could have met Katelynn before she passed away.


We had also planned to meet up with some of our new friends that took Hailey on a special adventure through Disneyland that was planned specifically for her. I knew it was going to so much fun for Hailey, but it ended up being a MAGICAL day for our girl! 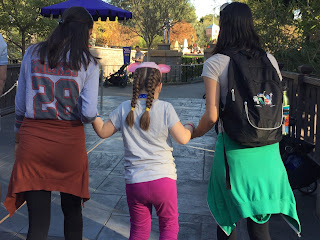 During the Christmas Parade something pretty awesome happened. Jessie from Toy Story was in the parade and found Hailey in the crowd. She stopped, jumped off of the Army man jeep, and came over to kiss Hailey on the forehead!! We've never been able to meet Jessie and this was such a fun surprise. Jessie went above and beyond and Hailey couldn't stop talking about how her and Jessie are best friends now! 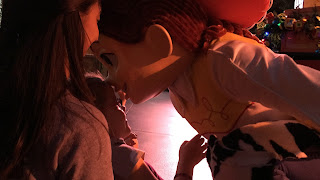 Last time we were at Disneyland we had ZERO luck in finding and taking a photo with Mickey Mouse. This time when we found Mickey he had 100% of Hailey's attention. It was so cute to see them interact and hug and when it came time for a photo Hailey insisted all her friends HAD to get in the picture too! This is a great group of people and they made Hailey's day one to remember for a long time!


After our day at Disneyland with our wonderful friends we had to say goodnight but Hailey didn't want the party to end. She wanted to go over to cars land because she said she didn't get to see McQueen and Mater yet. So we headed on over!

Hailey is NOT shy and I LOVE that about her. She likes to introduce herself, introduce mom, and introduce dad by telling everyone that he's 40!

While in line to say good night to McQueen one of his Pit Crew members stopped to talk to Hailey. Hailey started to tell her all about the terrific day we had. Hailey even told her that she has to relax a bit and use her wheelchair because her legs where tired and showed her new friend her AFOs. That led to us explaining a bit about Hailey and then Hailey invited the pit crew to learn more about Leukodystrophy by inviting them all to her Facebook page or as Hailey says "her dot com"

The pit crew had said that McQueen is ready to go back to his garage to go to sleep for the night but if we wanted to we could all walk with him. Hailey was so excited and then even more thrilled when McQueens Pit crew presented Hailey with a mini stuffed McQueen of her own! 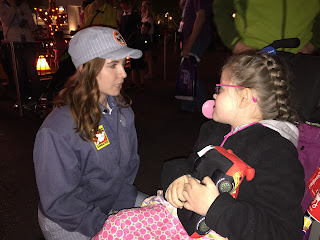 As the park closed we strolled with McQueen and Hailey to his garage and the pit crew had told us that it is an extremely rare thing to take a photo with McQueen right outside the CARS ride Radiator Springs Racers (a ride Hailey would LOVE to go on but can't exactly handle right now, but one day she will be able to)
This was such a neat opportunity for us to be able to get to take this photo. It's another of my favorite memories that we were given, by the awesome Disneyland Cast members we've met! We thanked them all, gave out some hugs and also some Hugs for Hailey bracelets as a thank you and a reminder to them of when they made a little girl extremely happy! 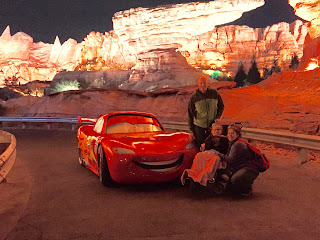 The next day we had something very special and fun planned for Hailey. A very close friend of hers had given Hailey the gift of getting to go to the Bibbidi Bobbidi Boutique from Life With LOL : Lauren's Journey. We all miss Lauren so much that we all thought of her the whole time we were there. My eyes always had tears in them as Hailey was getting this fun treat. Thank you Lauren for your sweet gift!


Hailey could not stop smiling! She told everyone that her name is Hailey but she's dressed as Rapunzal!

When we saw Rapunzal Hailey just had to say hello and show off her hair, nails, and dress to this fun princess!

Then all of the sudden a cast member presented Hailey with this ticket! 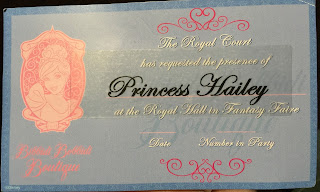 We were not planning on going to the Royal Hall to meet the other princesses but the ticket was given to us and invited us to go the the Fantasy Faire to do a private meet and greet! It was a wonderful surprise and again...tears from me. How thoughtful that someone would anonymously do this for Hailey! Thank you, who ever you are!

After Hailey's royal treatment I had said that I wanted to check out the Viva Navidad parade over at California Adventure. I am SO glad that we did! We LOVED this mini parade. The music just made you want to dance along. Since music is a huge therapy for Hailey I knew that she'd love it too! Hailey loves to Samba! 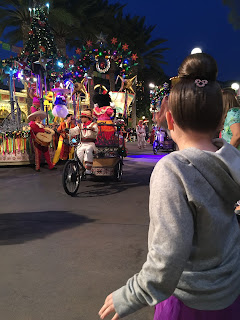 We were just in time for the Pixar Play Parade as well. If you guys remember, in October when we went to Mickey's Not So Scary Halloween we met awesome people at Monster's University. We gave one of our favorite MU Cheerleaders the heads up that Hailey would be in the crowd and where. When the MU Cheerleaders came near, Hailey started waving vigorously and low and behold we got the chance to say hello, shake some pom poms, and give a quick hug! It was so much fun for Hailey. She even told me that she LOVES all her new friends! It's such an incredibly special thing for Hailey to even just get a quick hello. We appreciate the time people take for these little opportunities! 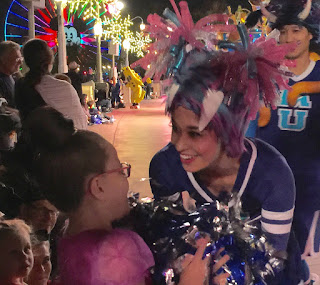 This next part of our story is a little confusing, but so much fun, so stay with me as I try to explain! We were at California Adventure after a LONG day and we decided to get some ice cream (even though it was cold Hailey's dad could eat ice cream in any weather). I get a text from Hailey's Aunt saying that her favorite artist, Artist Abe ,hid one of his drawings over at Disneyland and if we were near by she'd be SO SO SO Happy if we could get it for her. It wasn't just walking over and picking it up, it was figuring out where it's hidden from clues posted on Instagram. My little sister does a lot for us so I figured it would be something fun to do with Hailey for her. We high tailed it across the way to Disneyland and then got a text. The first art piece was found near Star Tours but there is still one more left. It's near Club 33...
I had no clue what that meant, and when I asked a cast member they didn't even know! (they were new) So after trying to get through the crowds with a child in a wheelchair we arrived at the spot, but we were too late! The drawing was gone!
I messaged my sister on Instagram and tagged the artist saying that we tried but we were too late and I even took a picture of us where it was supposed to have been hidden. We were so bummed we weren't able to do this little favor for my sister.
Then I get a message from Artist Abe inviting us to meet up with him so that he could give us another copy of the art that was hidden that we were looking for. He noticed that we really did try hard to get the print for Hailey's Aunt. We were so thankful for such a sweet offer. I ended up telling Hailey that we WON the scavenger hunt after all and she was all smiles.
When we met up with Abe he asked us if we live near by...only about 300 miles away. We told him that we come down often for Hailey since it's her very favorite place to be. Hailey even told him that she likes drawing too and he invited her to get a drawing of her own sketched up. Abe was extremely generous with his time and with Hailey. He wasn't in a hurry and he took his time to listen to her and asked her questions, like what's her favorite ride. She squealed, "SMALL WORLD!!" I told him that's just how she says it...every time! She could go on that ride 10 times and be just as excited the 11th time. We really want to thank Abe for his time and generosity with Hailey. He even posted and tagged Hailey in a photo and helped share our story. It was pretty incredible and in the end my little sister got her print from her favorite artist because of Hailey! Thank you ABE!!


We had an incredible 3 1/2 days at Disneyland and it was a wonderful Christmas gift for all of us!

Every person we meet or have met becomes part of our memories and they are wonderful memories that I love sharing and blogging about so that we can look back on them. Thank you to all the Cast Members who go above and beyond. Thank you to our friend Kaylee who planned such a fun day with all her friends taking part. We loved the fun adventure that you had planned for Hailey!
Thank you to Artist Abe for being wonderful to Hailey and sharing our journey! Thank you to the Mason family for giving us these opportunities to take Hailey to Disneyland. We appreciate everyone so much it doesn't seem like THANK YOU is enough.