**I don't know if I mentioned exactly how Hailey was at this time. She is walking, and talking and it's only been 2 weeks since her episode.

When they call us back Hailey is super tired and pretty much falls asleep instantly. We spend nearly 2 hours between talking with a med student who needs our whole background history and then her relaying that info to the "Real" Dr. then waiting for him to come in. I will condense this as much as I can. Here is what happened:

We were there all together for 3 1/2 hours. We didn't get much out of him beside maybe getting that never conduction test.
Since we didn't want to drive back to Vegas that night we spent the night there at the Tiverton house. We decided to take Hailey out to do something fun that night and there wasn't much to pick from. We decided on Universal City Walk.
No trip is complete without stopping in Hailey's favorite shop: 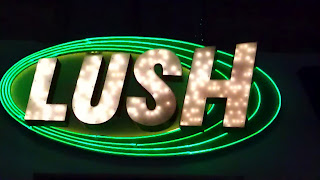 and dinner with one of her most favorite people ever:

We end up driving home the next day still not knowing exactly what is wrong with Hailey, but we have knowledge of the nerve conduction test. When I asked if it was painful I never got a straight answer. They never had one, some people are too dramatic about it, some are super laid back. Who knows?
We head back to Vegas, and have some things to think about. When we talk to our Las Vegas Neurologist he doesn't recommend the nerve conduction test. He said that he could get the same results with a blood test as with the NCT. It's something to think about.
We end up getting a call from a Dr. in Utah that specializes in Leukodystrophy and he has an appointment available in 15 days from then. I think that if he specializes in this disease he will be able to tell us which one she has and what we can expect/prepare for. So now we need to plan a trip to Utah.
Josh's car is newer but he drives so much for work that he has over 170,000+ miles on it. My car is 15 years old but has 137,000 miles on it and needs a few things done and we wouldn't be able to drive it to Utah. We end up having to rent a car, book a hotel because we don't want to keep Hailey in the car for too long, and then figure out where we are going to stay. Luckily we have a few options. I have a friend that lives in Ogden, Josh has a friend that lives in South Jordan and I have a recommendation from a social worker for the Ronald McDonald House, but they are full for now.

The first half of the trip goes great. We drive to Cedar City and spend the night there. They have an indoor pool so Josh takes Hailey swimming and she is having a lot of fun. We go to bed early and head out to Salt Lake. We will be staying in South Jordan with Josh's friends family. They have two little boys that Hailey was excited to see. Our appointment was the next afternoon so we head out for dinner and we have a Vegas favorite, Cafe Rio!

I had some trouble sleeping that night. I kept checking to see if I had all her medical work, test results, and MRIs ready to go. I don't think I fell asleep until about 1 am and that was after I took a melatonin. This Dr.s appointment was nerve wreaking. He was going to tell us if he thought that Hailey had leukodystrophy. I hate that word. I hate typing it. I hate knowing what it means. I hate reading it. I can't read about it, but reading the word is just as bad.

We meet our neurologist and it's like starting over again. Hailey history, reliving everything all over again. Hailey falls asleep in my arms, but before she did the Dr. saw how she walked and ran up the hall and got her to talk. It had been less then a month since her last episode. One of the questions he asked us was  if when Hailey had an episode and then "got better" was she better then she was before the episode. She always did, and that was interesting to him. Since he can't just guess what she had with out extensive blood work, he gave us his best guess.

He said that looking at her MRI scans and know what tests they have taken he could take an educated guess on a few things:


The answer to that question sent me over the edge. The words that came out of his mouth were: "Enjoy the time you have left with her."I am sure he delivers this news multiple times on a daily basis so he might be a little numb to how devastating those words are for a parent to hear. I couldn't even type them let alone hear them. I really don't remember the rest of the appointment. I was just a sobbing mess. My chest hurt, it was tight. I think I had a panic attack.

That night we had a room at the Ronald McDonald House. We had to start calling family to tell them what the news was. I couldn't call anyone, I emailed. Josh could talk about it. He called his family. In a way you have to think, it is what it is. You can't change anything, you couldn't have done anything different. It's just bad luck...or bad genes in our case. The Dr. also said the chance of Hailey having siblings with the same disease was 25%. No more kids for us, but even if there wasn't a chance Hailey needs 100% of both of us anyway.

I don't think I slept that night either, I know I didn't eat. I stared at Hailey a lot. She was playing on the iPad on the sleep away couch. I couldn't take my eyes off her. So many unpleasant things went through my head over and over the tears wouldn't stop flowing. I had to relive the Dr. appointment every time Josh called one of his family members. One of the things he said was that, we'll give her the best we can, and do everything we can for her. I think that made me cry more.

The wall in our room had these words on it: 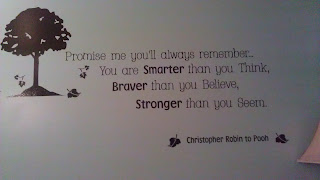 Honestly it couldn't be more appropriate. These words have FOLLOWED me numerous times. I see them EVERYWHERE! I feel like I need to know more about Hailey's disease but to this day I can't bare to read anything about it. I know the gist of it. Isn't that enough?

What are we suppose to do if she has another episode? The Dr. said that it's up to us, but the way the L word disease progresses it's inevitable, that Hailey may/will one day be in a wheelchair, may/will one day she'll need a feeding tube, she may/won't be able to control her bowels. Yes I know I put "may" and if she has this terrible disease I should say will, I can't yet. I haven't accepted this and I don't know if I ever will.


**Sorry if there were tons of grammatical mistakes. I couldn't bring myself to re-read this and correct anything.**
at 9:35 PM