Our Story Continues...off to UCLA

So Hailey's 3rd hospitalization was in April, late April. We see her new pediatrician who is getting us info on how to get to UCLA. I had been hearing that it's a great school/hospital and so many people were positive we'd get some answers. In the mean time we still have to see the neurologist here in Vegas. He has a new idea for steroids.

He wants Hailey to do a full week of steroids at 5mLs in the morning and 5mLs at night. Remember 5 mLs = 1 tsp. After one week he wants to take her completely off and go a whole week off steroids and try that for 1 month. I know the look on my face was dumbfonded. How could he not see that every time she is off steroids we are in the hospital? Well, he's the Dr. right?

Well a month goes by and Hailey is still doing good. She had her 4th birthday at a bowling alley. She had so much fun and was doing great. A month ago she couldn't walk and now she is holding a 6 pound bowling ball in a bowling alley.

In June we go back to the Dr. and now he wants Hailey to cut that dose in 1/2 one week on and one week off. Now, I'm nervous. Hailey goes a full week on at 2.5mLs in the morning and 2.5mLs at night. Then she goes a week off and things almost seem fine until the last day off and the next day she was suppose to start back on again. The next morning I wake up and hope Hailey is walking and walking well. I notice when Hailey walked into the bathroom she passes my bed and bumps into it. Am I over reacting? So I call Josh while he is at work and I know he hates when his phone rings in the middle of the day and he sees my phone number. It's one of those calls where I say, "I think it's happening again..."

Josh rushes home and we go to the neurologist office without an appointment. The front desk girl tried to have me schedule something for next month. I told her to either bring the doctor out here to the waiting room or we'll go find him. He comes out after about 20 minutes. He sees Hailey is off balance and his suggestion is to have Hailey go back home and up the steroids to the 5 mLs she did fine on. If by Friday she's worse go to the ER. We had hoped that would work, but on Thursday I didn't wait any longer before we took her in and admitted her with ATAXIA...again...

She is barely walking on her own when we are finally admitted. The neurologist meets us there with the pediatric resident. Here's where it gets super scary. Our neurologist the one that said repeatedly that she has chronic adem has a dreadful look on his face. He says to us:


Oh my chest was so tight and I was mad and I was sad and I wanted to pass out. He said that we need to take Hailey somewhere else. There was nothing more they could do for her here. They said that they would do the IVIG, hope for the best, but in the end that was it. In my eyes they were telling us not to come back. I told them I had an appointment to go to UCLA in 1 week. The neurologist said that they would be any help they specialize in epilepsy and seizers in children. I told him that maybe if he would have suggested a place that we should take Hailey we would have been there by now.
The did the IVIG treatment but Hailey is going downhill fast. She can't bare weight on her legs, her speech is gone. They did the IVIG over 2 days and I cried the whole time. I am thinking this is it. She'll never walk again, she has this horrible disease and our lives will never be the same.

My little girl is usually always happy. She will laugh at the drop of a hat. The silliest song, or at a funny face.

They ask us if she is having problems chewing and swallowing her food. She's not. She's eating like a champ. 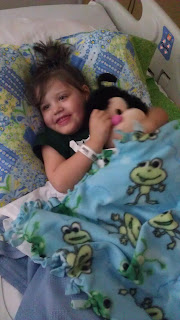 The third day when we were suppose to go home Hailey woke up and ate her breakfast and then vomited it all up. Well after that happened we weren't going to be going home. They gave her some zofran and she slept most of the day. They kept her on an IV and tried to get her to eat crackers but it didn't work. By the middle of the night  (3 am) she had woken up and wanted some crackers. I got the nurse and she ate a cracker. She held it down and the next day they were able to discharge us. Josh missed work and had to return. I had Dr. appointments to schedule, chores to do, but I wasn't going to leave Hailey upstairs in her room and I didn't want her to sleep on the couch in case she rolled off when I went to the bathroom so I made her a bed on the floor with a pad underneath and a puppy by her side. My dog is constantly next to Hailey. I mean ALWAYS. Such a sweet pup. 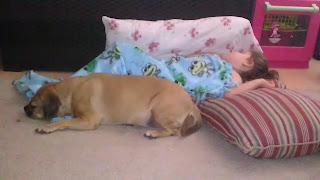 After a few days Hailey's speech was coming back and she was able to bare weight but not walk. I remember laying down by her on the couch and crying. She looked at me and said, "mom, don't cry. Be happy, like me."Ugh...I LOST it! We looked into getting Hailey a bean bag chair so that she wasn't laying down all the time. Those things are pricy! We found brand new large one for $400+ Luckily my friend Christina found one on Craig's list and we ended up getting it for 1/2 the price of a new one. It's the kids one so it's small, but it'll work better then the make shift one we had for a day before we got the one she uses now.

Once we did get the bean bag she was pretty happy with it. I would find myself always having a head ache. Hailey always helped with that. 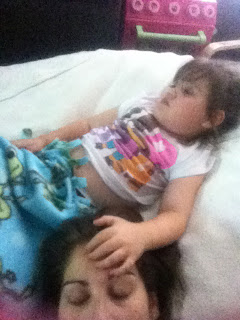 Before we leave to UCLA we have a meeting with a medical supply company and we wanted to order Hailey a bigger kid stroller, but the insurance would only pay for a child transportation stroller (a Wheelchair) Even though we needed this ASAP we weren't going to be able to get it for a few weeks (or so I assumed).

Again after a week she's back up and walking and talking. Not as well, but on her own for the most part. I still hold her had to help balance, but she can walk on he own.

Now it's time to head to UCLA. It's not a long drive, about 4 hours and we decided to leave in the morning for our afternoon appointment. We get to our hotel with about 1 hour to spare. The hospital is only a 10 minute walk from the hotel but we take a shuttle. It's a nice hospital, very colorful and kid friendly. Our appointment is in 40 minutes and for some reason I am on the verge of tears...