Can you believe it has already been a year that Hailey has had her Pacemaker?? The whole thing is very surreal to me. I still find it hard to believe that my 7 year old has a pacemaker. In reality everything about Hailey is surreal, the leukodystrophy, the g-tube, our story in general, but we try to always focus on the good and celebrate when we can. Even if it's something small. 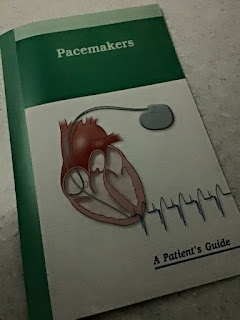 When we asked Hailey how we should celebrate this big milestone. I think I could have guessed what she would say. She wanted to go to her happy place. Disneyland!! So we did!

As soon as we got there I had the idea to turn Hailey's Mickey Ears around so that people could see her name. Every single person addressed Hailey by her name and she was in awe that everyone KNEW who she was! (Her name anyhow) It was magic! She said, "all my friends her remember me!!"
"Yes they do!!" I said. Wink Wink...

When you find Peter and he tells us that we should go to Pixie Hollow cause the fairy's are waiting for us you go!

Roger Rabbit was there for the Annual Passholders to get to see. Hailey didn't know who he was at first but soon became a fan. When she introduced me and her dad, Roger went wild when she said, "this is my mom Jessica!" it was really cute!

The highlight of the trip was getting to watch the Pixar Parade. Magically a lot of the characters in the parade were made aware that Hailey would be in the crowd and where she would be. Hailey got a few extra kisses blown her way and some high fives as well. It was such a fun experience for Hailey. She was so giddy with excitement and I love that she was so happy.

Our favorite characters were the Incredibles. We love those guys so much!!

You can't go to Disneyland without stopping by the Character Close Up with Anna and Elsa and NOT get a group hug! Hailey loves these guys! 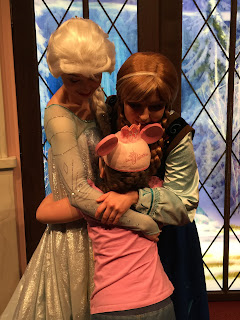 We were so lucky that Hailey found her friend Kaylee at Disneyland and was able to spend the morning together! Riding on rides with someone other then mom and dad just makes the ride more thrilling!

Baymax was another Annual Passholder meet and greet. I was worried about this one. Baymax was so popular there was a line just to be able to strand in line to see him. So I decided I'd do that while Hailey and her dad went to the Frozen Sign a long and then had some snacks. Hailey just watched Big Hero 6 and was pretty excited for this rare opportunity.

As you know there are not that many rides that Hailey can go on for one reason or another so character meet and greets are what she loves best!

During DJ's dance party Hailey also made some friends with the dancers, and they were so great with her. They held her had so that she wouldn't fall since she was still a bit shaky on her own from her last ataxia episode, and then invited her to say goodnight to DJ in his garage! This was so special and we appreciated the invitation. Such a great way to end the night! I always say that the cast members mean so much to us by these little gestures and then when I talk to them they thank me for letting them do these things for Hailey. They find such joy in being able to help a child smile like Hailey does. 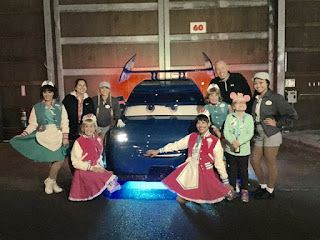 My sweet Hailey always making friends! She met another friend named Max while waiting for Anna and Elsa and she instantly had a connection with him! They watched the parade together and then rode Buzz Lightyear!! They ended the night by taking photos by the castle as it was lit up so beautifully! We appreciate Kaylee and Max for showing Hailey the extra love. Best Friends Forever!!

The actual celebration on the Pacemaker came when we had Breakfast with Minnie and friends! Hailey was too excited. Instead of chasing down characters they come to your table! So great!

When you ask Hailey where she wants to go to celebrate anything she will NEVER not say Disneyland and that's fine with me. She is so happy when she is there! It really does bring some magic to her. All the things others do for her mean the world to us!

Happy 1 year Pacemaker anniversary!! Here is to many many more!