Hailey has pushed through this last relapse like a champ. She was unable to sit or crawl for about 3 weeks until her head stopped spinning and she regained her strength. We kept up with our appointments and her physical therapist, not ever seeing a child with leukodystrophy, was amazed at how far Hailey would push herself during PT.
We had been discussing getting Hailey a Gait Trainer (which is like a large walker) before she had relapsed. We knew we would have to fight our insurance for it and they would come back and say that we could order it but if they denied it, it would be our bill to pay. Well, with a price tag of over $7,600.00 we knew we weren't going to be able to just pull that out of our hat.
So what to do? We want Hailey to get what she needs, we are the parents that need to provide for her, insurance is suppose to help. When ever an insurance problem comes up I always ask myself what I pay for every month when they do nothing for me? Since Hailey is a minor and for some odd reason doesn't qualify for disability she (we) can apply for Medicaid. If we get the gait trainer and submit it to medicaid and they help us pay for it we will be good to go. Until everything gets figured out we went ahead and put the order in for her gait trainer.
After a month when the GT arrived Hailey had already had and came out of her last episode. She was ready to get walking all alone.
At the end of August will be 1 year that Hailey hasn't been able to walk and has been wheelchair bound. The days, and months are going by fast in slow motion if that makes any sense. On one hand I can't believe it's been a year on the other, everyday is such a struggle and it seems like it takes forever for 1 day to pass. Especially when she had her episode that was the longest 3 weeks in a long time.
Hailey was ready to get started with her walker. She did so good. Always with a smile on her face. She walked up and down the room. 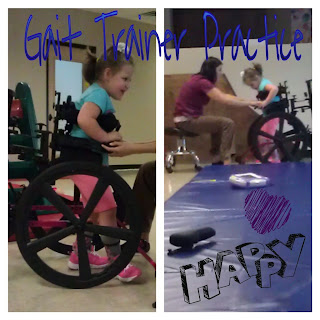 It is so important for us to be able to give Hailey the independence she wants so bad. It breaks my heart when she tries to get up and do something and then gets called back to reality that she's unable to walk anymore. But I am glad that she will keep trying. Who knows maybe one day her brain will communicate with her body and follow direction.
The other day at her school all she wanted to do was get out of her wheelchair and dance to the music the other kids where dancing to. Since I am around Hailey 98% of the time I have experienced the un-nessasary neglect some children show towards Hailey. I understand that they don't get "it." Why can't she walk? What do you say when a little kid asks that? She's sick? Well, kinda but don't worry you won't catch it. When there are kids that won't play with Hailey there are kids that don't see the wheelchair and will play with Hailey. It's hard when you see you child get left out of things that she obviously wants to be a part of. I've seen it and it hurts, but I don't let it get to me. I try to "fix" it when I can. Josh hasn't been around this part of Hailey's life. He's at work when she's at school and I attended school with Hailey for many many days seeing this happen several times.
Over the weekend we attended a festival where there was music, food, and dancing. While I went to get food, Josh was with Hailey and she wanted so bad to get out of her chair and play with the little girls that were dancing to the music. When he takes Hailey to where the girls are the girls move. He helps Hailey go to where the girls are now, they move again. Hailey is getting upset wanting those girls to hold hands and dance with her, but they are moving from here to there and not including Hailey. Once I get my food and make it back I go to Josh and he asks me to take her and he leaves. I knew something was bothering him so I leave Hailey with my mom and go after Josh. He was so upset about what had happened. He tells me with tears that, "all she wants to do is play with them and she can't." I kind of think I should have prepped him for this. You never what to think that people are saying, "oh look, no one wants to play with the handicapped kid." There are people who do and there's nothing I can do about that. I've had people read my blog and actually tell me, "I'm so glad this isn't happening to me, I'm so lucky." I don't say what I want to say back and maybe I should. With Hailey I become her friend and I tell her I want to dance with her and I want to play with her, she won't be alone. Once I finished talking to Josh I went back in and my mom and a family friend were with Hailey and those same little girls were with and they were holding hands and dancing together. Hailey was so happy!
So when things come up that cost thousands of dollars and you think there is no way for you to afford something that, that will help increase the quality of life for your child, you just go for it. If it works out, awesome. If it doesn't, well...that's life. If it takes us $20 a month for 32 years then that's what it'll have to be. You can't put a price on your child's smile.