Taking Hailey to Disneyland is always amazing family fun! She is so happy the whole entire time. It's a magical place for her and we love that we were able to take her for her 7th birthday. The first thing we did...Disney Jr. Live!!! Last year we went to this show 5 times. It really is one of her favorite shows to see. One of the cast members, Chris, treated Hailey like a VIP and let her pick where she wanted to sit. She was excited to say the least!


Meeting characters is on the to do list. I love how this is so real to Hailey. Getting autographs and photos are such a fun thing for her to do! (I just wish the lines where shorter!)

There is a new Frozen Sing a Long show at Disneyland California, and we saw this show MULTIPLE times as well!! It was also a lot of fun and the singing was Hailey's favorite part! 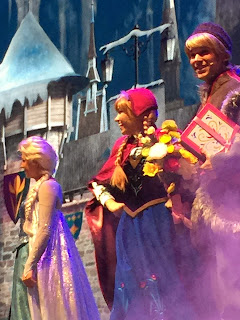 Over at Disneyland there is another Frozen show and this was another MUST on Hailey's list. She hears the music and immediately starts singing! Again all the cast members were amazing with Hailey. 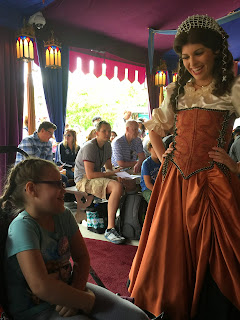 It seems to be a tradition now to have lunch with the Princesses and it's always fun for Hailey to get to Hug royalty.

Another fun surprise we had for Hailey was that there were a few families that we originally met at the Hunter's Hope Foundation Symposium that we were able to meet up with! We always have so much fun with our Leukodystrophy family. Hailey had lots of Hugs and Kisses for everyone!

We even went on a few rides with everyone! 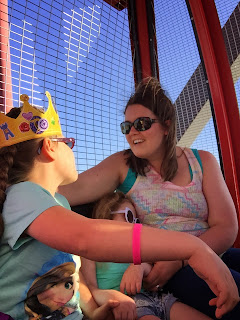 Then we all had dinner together! I can't wait to hopefully see everyone this year at the symposium!!

Hailey was very excited when she was able to see Olaf from Frozen! Hailey even wore her Olaf socks with her AFOs. He pointed them out and we told Olaf that Hailey loves hugs too!

Anna & Elsa!! They were both great to Hailey and made sure to spend some time talking with Hailey and gave her lots of Hugs! This was so special. Hailey LOVES Frozen...still!

Hailey had seen some YouTube videos of Disneyland and was determined to go on Dumbo. I didn't think it was a very good idea but Hailey wanted to and so we did. After, she said that she did NOT like Dumbo. I had that song from Tangled pop into my head, "Mother Knows Best." HA!

It's a Small World was the ride that Hailey would choose 100 times if we let her. She smiled, sang, and pointed at all the dolls saying, "look at that!"

We've never met Sofia the First before so this was really fun for Hailey!

While pushing Hailey in her wheelchair we'd end up walking through bubbles that kids where blowing with bubble guns. Hailey laughed and smiled and really wanted one of her own. She got one and she had so much fun with it. Walking through Disneyland through bubbles is 10 times more fun! There is also a really cute video of Hailey on her Facebook and Instagram page of the bubble adventure!

Hailey was given a button that let others know that it was her birthday and boy did she LOVE the attention! She showed EVERYONE! 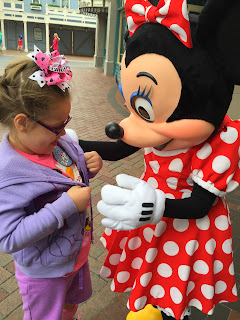 It was another great trip with our birthday girl. Disneyland, Our Hunter's Hope Families, Hugs, and smiles. I love seeing this smile on my daughters face! After the pacemaker surgery she really needed some fun and time away from Doctors and therapies, and school.

We want to thank the families that gave us this opportunity to do this for Hailey. It was amazing and we appreciate it beyond just saying thank you!