Hailey was invited with a few other Wish Families to see the Thunderbirds in a private show a day before the Air Show would be open to the public. We were told to bring hearing protection because those jets are LOUD. It is no joke! I had no idea where to get something that would work for Hailey. I ended up going to a sporting goods store and buying a pair of ear protection head phones that were located in the hunting section. They fit Hailey great and she didn't get startled at any of the noise.

All the wish families met up down the road from the air show and we all piled up in a bus to be transported on base. We were even given a police escort, I thought it was great to show these kids how special they are. Not everyone gets an escort on to the base.

Once there we were taken to a VIP tent where the kids were given Thunderbird pins to wear on their shirts, stickers, coloring books, and a program to be signed by the 12 pilots flying that day. 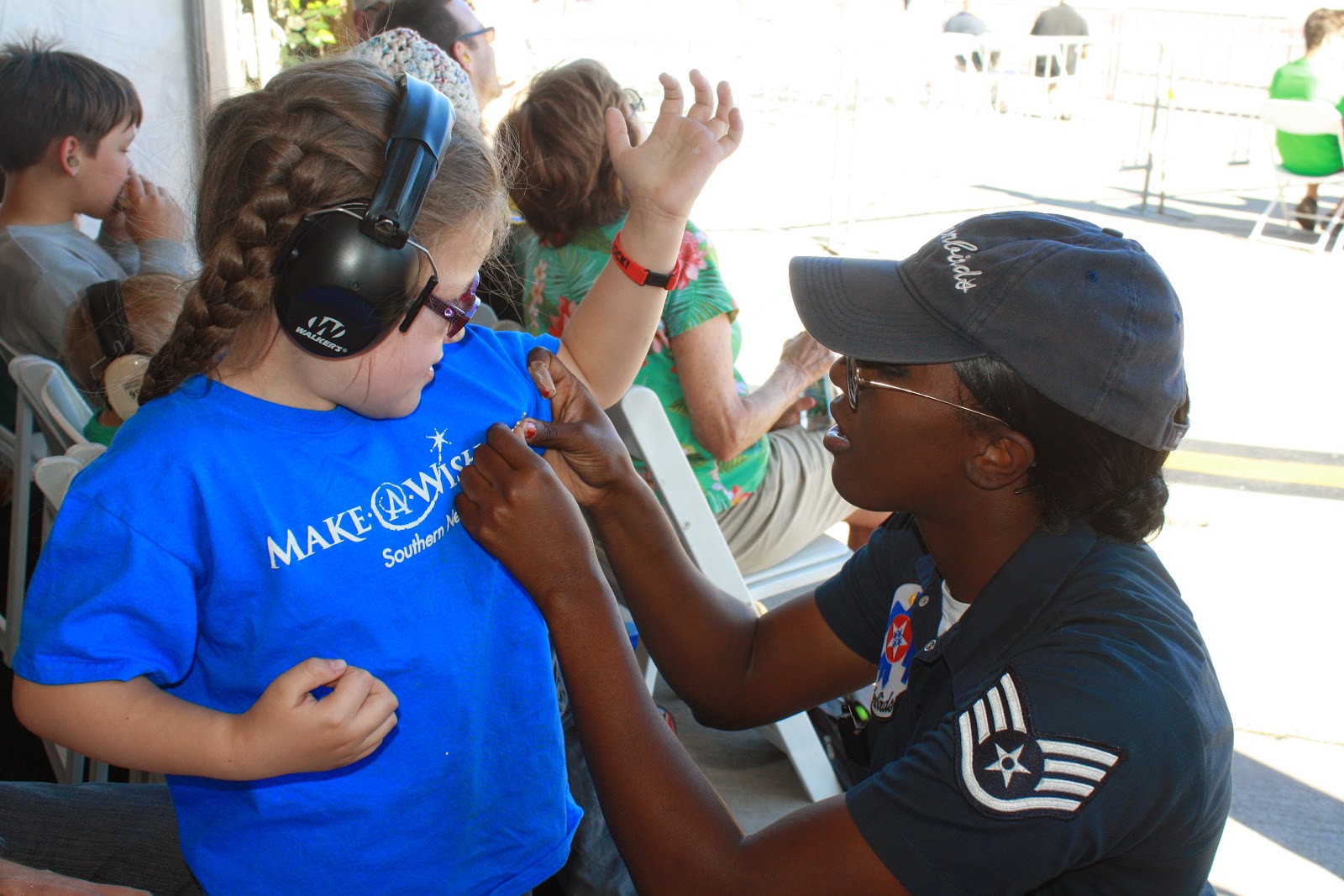 Hailey is an honorary Thunderbird!

Getting all these goodies sure did put a smile on Hailey's face! 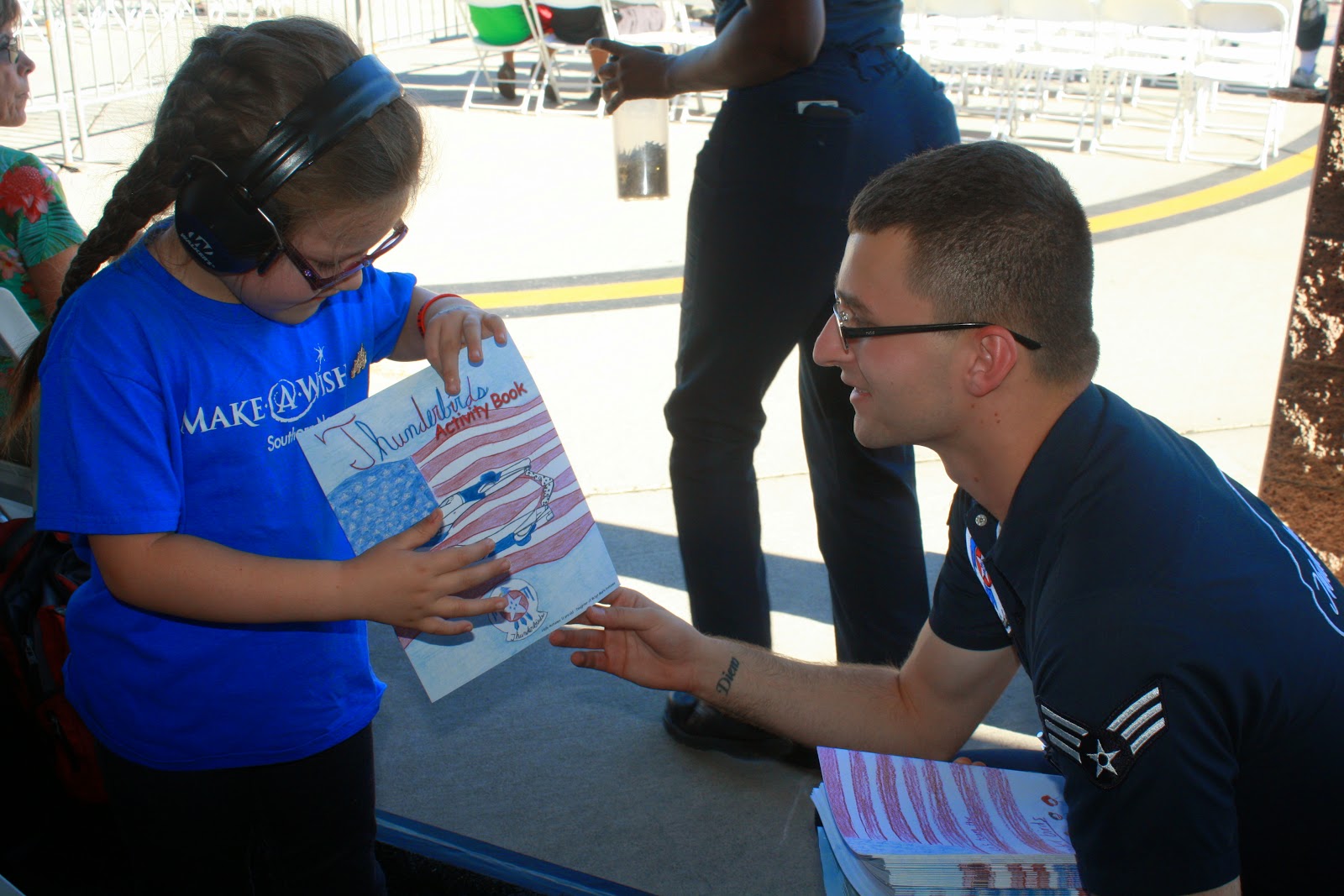 It's November and it was in the 90's for temperature! It was warm. You can see Hailey's pink cheeks. We had to keep this kid hydrated. 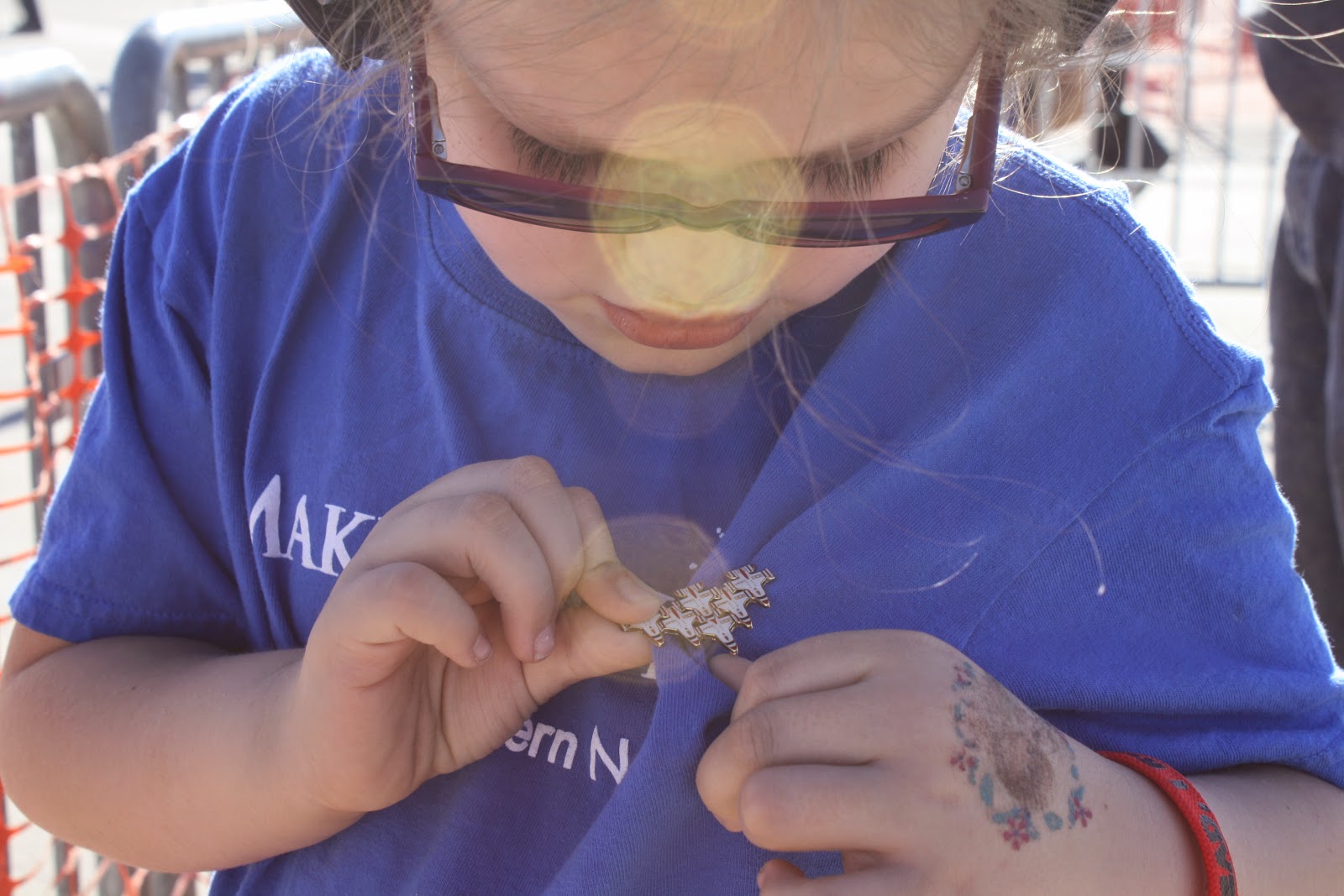 She loved looking at her pin. She showed everyone standing around.

As the pilots drove by they waved to all the kids!

The air show was amazing. The things they can do with these planes is amazing! Not only do they have formations that they do they also demonstrate how they can make a jet creep by so slow and low to the ground. It really was so neat to see! We really enjoyed ourselves!

Once the pilots were done they all came to the VIP tent and took time for each child to find out a little bit about them. They asked Hailey's name, how old she was, and if she liked the show. Hailey said that her favorite part was when they made a heart in the sky. 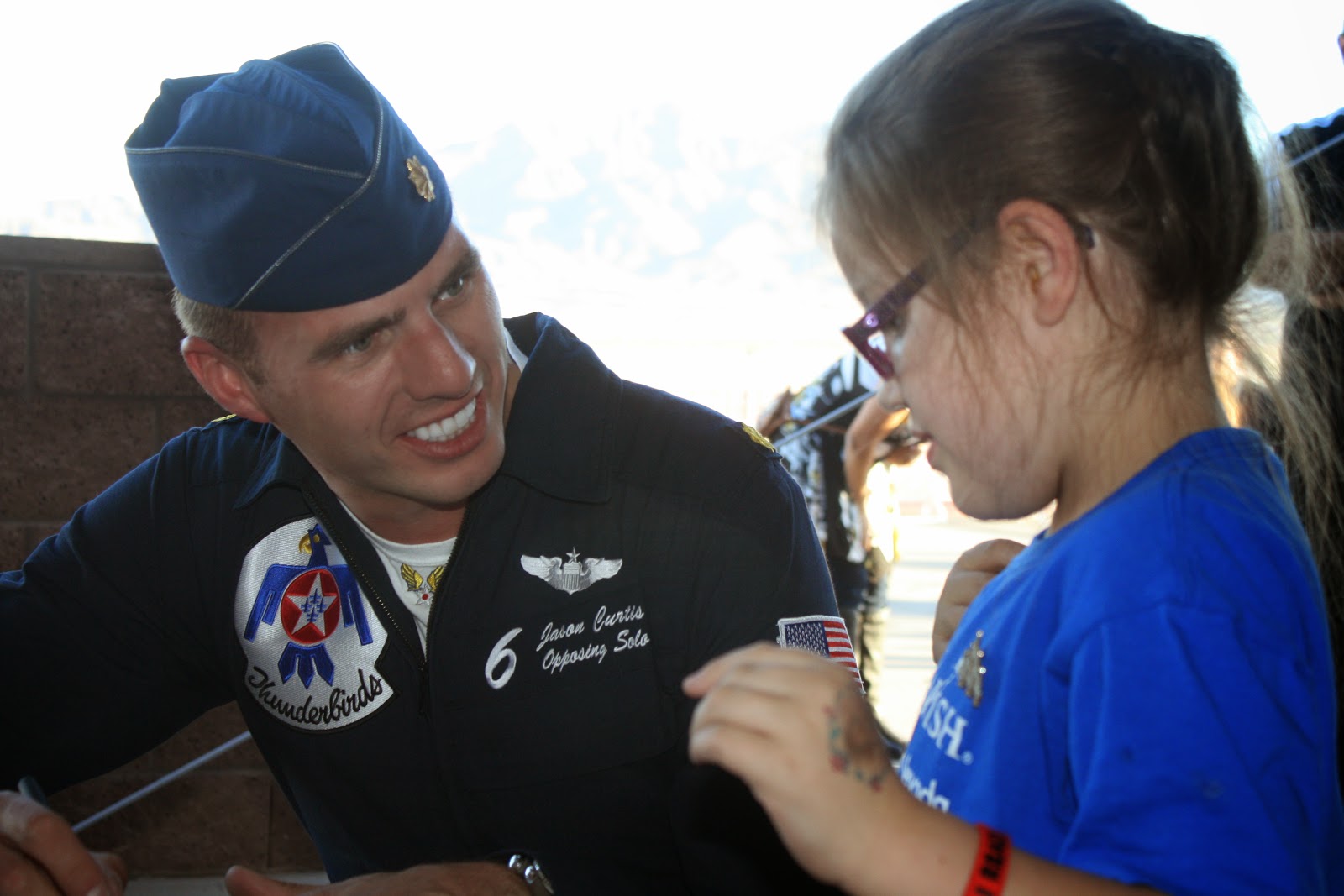 There was so much she wanted to tell each pilot and they were so generous with their time.

The pilot you see below had an American flag that he took up with him in his jet for the show. He presented it to Hailey and she gave him a huge hug and thank you! 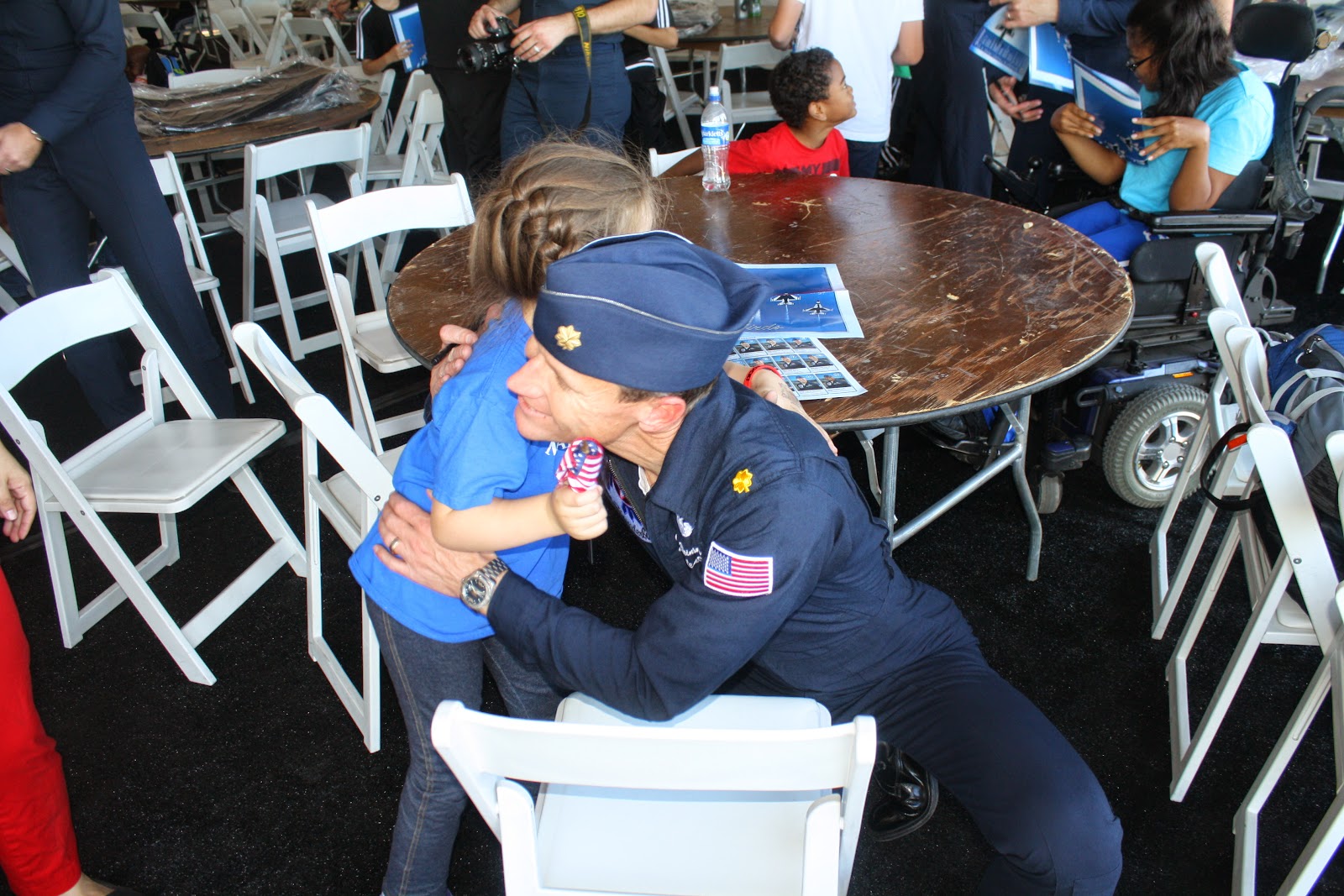 She loved getting autographs!

The pilots each showed Hailey which one was their jet. 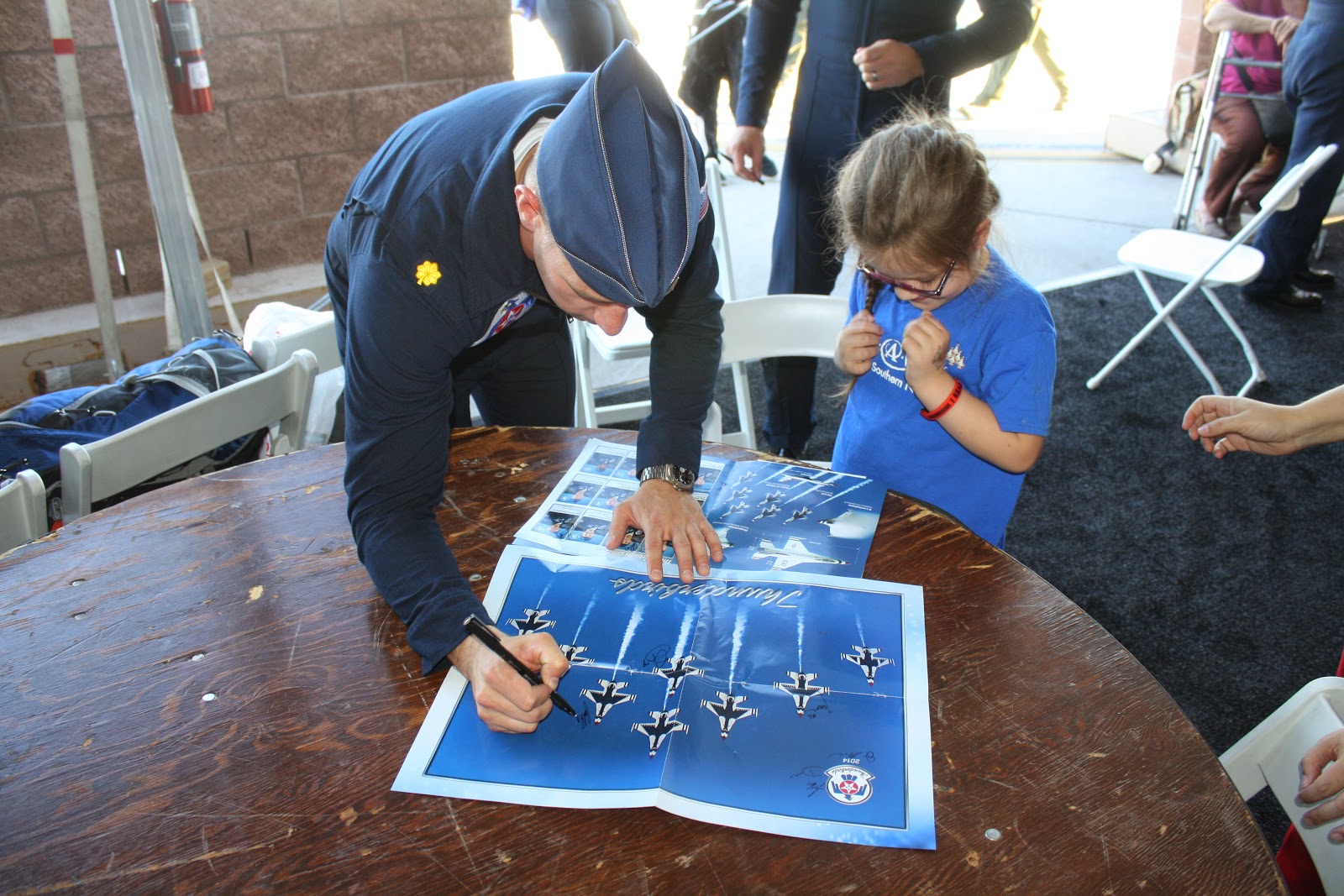 There was even a pilot that had the number on his uniform embroidered upside down because he spends a lot of time in the sky inverted. Pretty Neat.

Hailey made sure she told everyone her name and thank you. 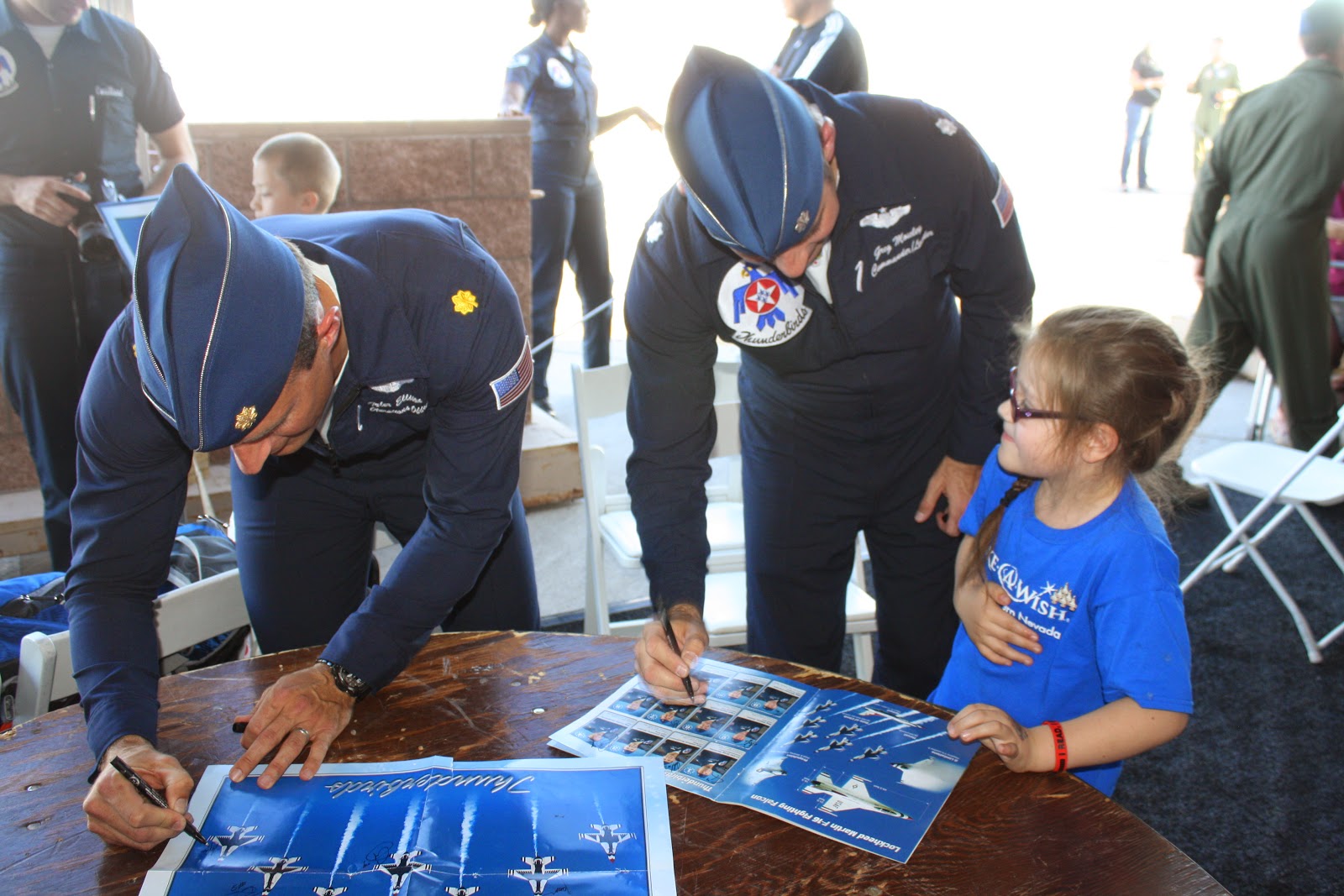 Big smiles all around!

Hailey loved seeing the "girl" pilot! She was the only female that flew a jet that day and Hailey asked her all kinds of questions....Like if her favorite movie was Frozen...inquiring minds!


Thank you to the Thunderbirds and thank you to Make a Wish Southern Nevada for always thinking of ways to get the wish families together to make more memories. We had a great time and everyone was so nice. I'm sure all the kids had as much fun as Hailey did!
at 12:26 PM

Email ThisBlogThis!Share to TwitterShare to FacebookShare to Pinterest
Labels: Make A Wish, Time with Hailey