We had received word that Hailey's Make a Wish will be in April. I had been wondering if traveling and doing Disney World would be too much for her and too much for just Josh and me to handle. We had wanted to take Hailey to Disneyland for a LONG time, but then we ended up spending month after month in hospitals and seeing Dr.s and it never happened. Josh and I both decided that getting away and giving Disneyland a trial run would be an awesome idea for the whole family.

Packing for a trip like this was nerve wrecking! I had to remember Hailey's formula, her feeding pump, THE CHARGER, formula bags, Syringes, Medications. Enough medical supplies for the duration of our trip. I made notes and crossed off as I went but I still second guessed myself. It's in my blood to forget SOMETHING.

The car trip down there was an easy one but we still had to do our stops along the way to make sure Hailey was comfortable. We stopped in Victorville and walked the mall while we hooked Hailey up to feed and then give her meds.

We figured out that the easiest place for us to stay would be at the Disney Grand Californian. It had easy access to the park and if we needed to go back to the room for anything we wouldn't have to take a shuttle. There was a lot that I expected staying at that Hotel that didn't happen but we didn't find this out until our first day at the park which wouldn't be until the next day. So after we checked in and settled into our room we took Hailey to Downtown Disney to take a look around.

The first thing that caught our eye was the LEGO store. Not that Hailey would be able to play with any of the legos but we like seeing what can be created with a lot of little tiny plastic bricks. 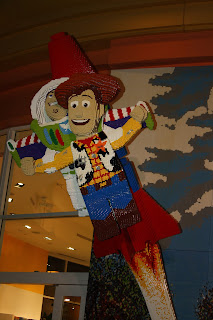 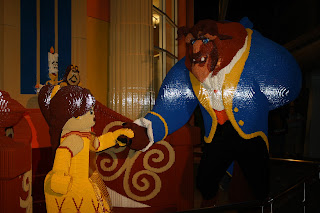 Belle and the Beast!

Then we walked into the largest Disney Store I've ever seen! I had to be a block long! Josh took this picture and I LOVE it! 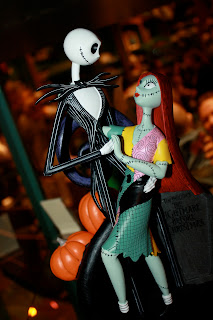 It was getting pretty late and I knew we had a BIG day tomorrow so we headed back to our room. I had made reservations for Hailey to have "breakfast" with the princesses in Ariels Grotto at Disneyland California. The Hotel staff had informed us that there is an Early Magic Hour for Hotel guests that allows you into the parks at 9 instead of 10am. Tomorrow was Tuesday and Magic Hour was at Disneyland not at California and our reservation was at 9:30 at California. So...what do we do? I asked but NO one knew? It was like this was their first time ever being asked this question which boggled me since they do this every week right? So since we can't get into California until 10 but our reservation was at 9:30 we ended up having to ask at least 6 people how we can go about getting to where we need to be when we need to be there. Confused?
Since we have access to Disney California via our hotel I thought that we would be able to just walk in through there but they told us we had to go through Disneyland to get to California. It was a fiasco and a lot to type out but long story short we did end up walking to Disneyland then across to California then waiting for someone to figure out what we were suppose to do, then passing us off several times until we got to Ariel's Grotto. 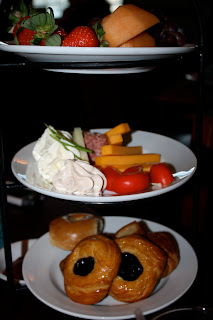 They didn't charge us for Hailey to eat because she wasn't able to but our first course was fruit, cheese, and pastries. Those Disneyland people can certainly get their food on. Everything was so yummy! 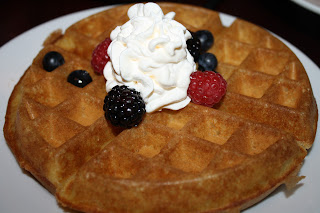 Josh and I shared this monster of a waffle. Then the princesses started coming out and it was like Hailey was seeing monsters or something. She freaked! Each time a princess arrived they sounded the horns and trumpets and announced the princess. Hailey was frightened repeatedly. As soon as I calmed her down the horns blew and the tears flowed...breakfast with the princesses was not the best idea.

Then I calmed her down and she got a button. The button made her happy. Then the horn blew and Sleeping Beauty came out...Tears 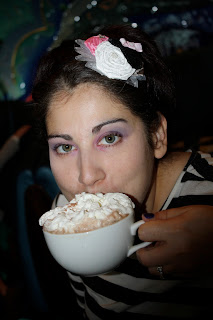 Disneyland had the BEST hot chocolate I've ever had! So yummy! I made Hailey laugh by putting whipped cream on her nose:
So even though Hailey cried 80% of the time a nice lady sitting next to us offered to take our picture as a family!

So breakfast  was over and it was time to walk the park. I thought, "well, she didn't like princesses maybe she'll like the characters that she watches EVERYDAY." Nope!


They had a couple of street shows and we saw one of her favorites. Phineas and Ferb! She loved it! Finally! 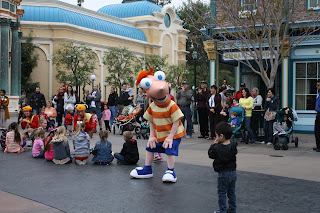 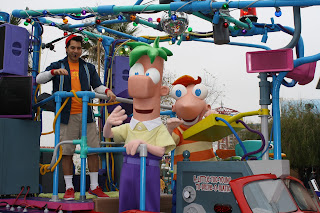 I knew that she would like this characters if she gave them a chance. She just didn't know what she was suppose to do with them so I told Josh to stand by Pluto and try and show her.

Lucky for us it was the most perfect time to be at Disneyland. We didn't have to wait in any lines for rides. At Disney California there were more rides that Hailey was able to be transferred on. The "cast members" were extremely nice. They saw how much effort it was to get Hailey out of her chair and on the ride and offered for us to go on the 30 second ride again without having to wait in line. I could NOT have done this trip without Joshua. He lifted her every time. Hailey is 60 pounds now and it's not an easy task.


A new part of Disney California was Cars Land. I knew Hailey would really love this! How'd I know...? In August of last year (2012) I had been potty training Hailey again for the 4th time. She was doing great though. Her last episode was in June but she was already walking and talking like nothing happened. She had pooped in the potty and for her big prize I gave her a mini Mater Pillow Pet.

She was happy!! We were seeing Mater live and in front of us. She couldn't stop staring at him! YAY!! 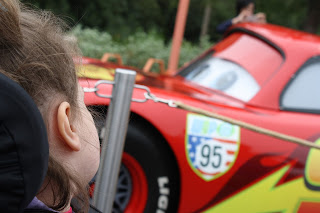 We didn't get a photo up close with McQueen he was off "refilling his gas tank" so this is as close as we got: 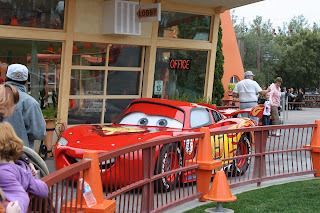 I LOVED Cars Land! All the details! Then they also had new rides. One of them was quite exciting. There was NO one at any of the other rides. They were ALL at the New Cars Land Ride, Radiator Springs Racers. The wait time in line was 150 minutes. Josh and I took turns in the single riders line and it took us each about 15 minutes to ride the ride and it was AWESOME! I loved it, even if I rode by myself. 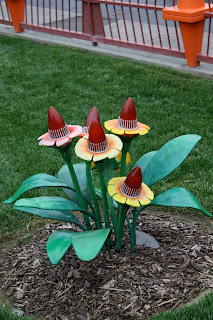 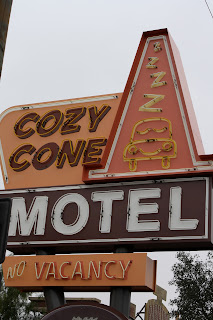 So we were going to spend the rest of the day in Cars Land but then without prior knowledge we found out that there was going to be a private party in Hollywood Land (where the tower of terror is) and Cars Land. They would be closing the park for the party 3 hours before the park closed. They still charged you the same amount to be at the park but they were taking 3 hours away from you without telling you. That was crap...

Before they closed they had a parade that we were able to sit and enjoy! It was the Pixar Play Parade. All the Pixar characters! 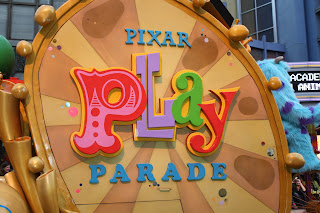 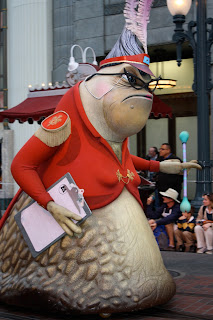 Roz from Monsters Inc. That was a fun ride also by the way. 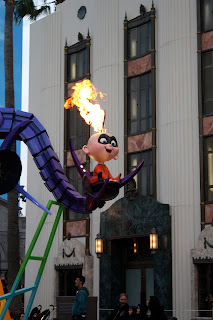 That baby from the Incredibles even caught it's hair on fire! LOL! 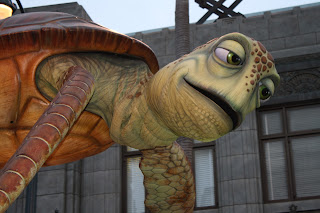 Crush from Nemo. They also had an attraction called Turtle time with Crush and Hailey enjoyed that! 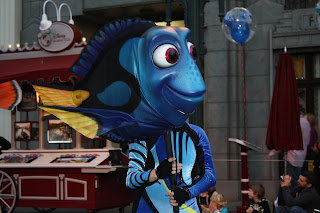 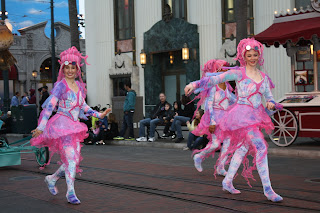 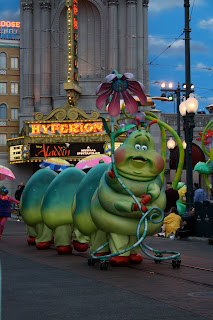 Heimlich from A Bugs Life. 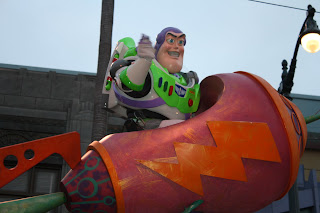 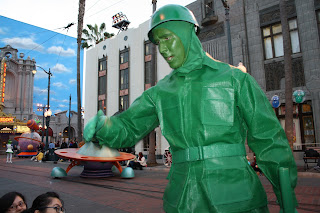 This Army man shook our hand! 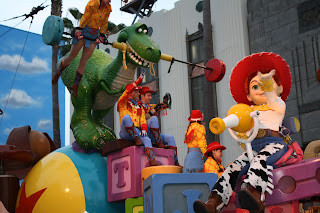 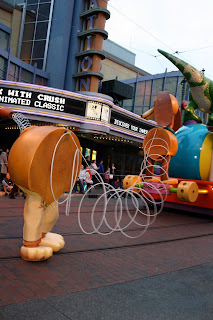 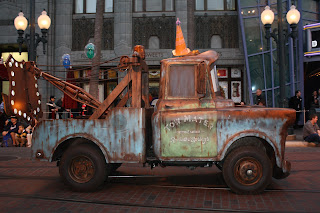 Our first day was coming to an end and we were going to head back to the hotel. Disneyland was only open until 8:00pm. On our way back I took this picture and I really like it! 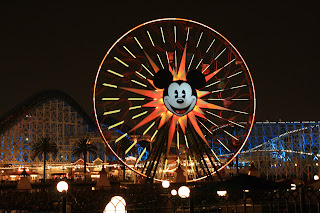 The morning started off pretty rough but it sure got better as the day went on. That was our first day and we had lots of fun! Tomorrow was going to be our Day at Disneyland and we were in for such a FUN SURPRISE!!!
at 4:07 PM